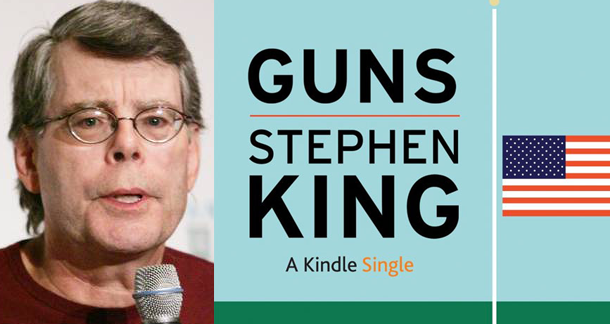 Stephen King is probably most well-known for his long career writing novels, mostly horror. Well, as a private citizen who owns three handguns, he’s just published his first Kindle Single, simply entitled Guns. As the Guardian so succinctly put it, his latest work “will read like a horror only to the National Rifle Association and other gun-rights advocates.” King’s polemic, sprinkled with expletives, is a call for fellow gun owners to support the ban on automatic and semi-automatic weapons in the wake of the Sandy Hook shootings in December.

"Autos and semi-autos are weapons of mass destruction. When lunatics want to make war on the unarmed and unprepared, these are the weapons they use," King wrote. He said blanket opposition to gun control was less about defending the second amendment of the US constitution than "a stubborn desire to hold onto what they have, and to hell with the collateral damage". He added: "If that's the case, let me suggest that 'fuck you, Jack, I'm okay' is not a tenable position, morally speaking."

The language is salty, sure, but he makes good points. He says the idea that shootings in the U.S. stem from a “culture of violence” is a lie, and the reality is the U.S. has a “Kardashian culture” more apt to watch or read comedies, superheroes and romances instead of violent stories with guns. I particularly liked the comment about paranoia about the federal government: “These guys and gals actually believe that dictatorship will follow disarmament, with tanks in the streets of Topeka.” But it's what he has to say about taking anyone’s hunting rifles, shotguns or pistols away, as long as they don’t hold more than 10 rounds, that made me laugh.

This isn’t the first time the author’s stuck his oar in, having loudly proclaimed last year that people like himself should be paying more taxes. It’s not likely to be the last. He’s made some good points, but no doubt he’s just upset the gun lobby — more. After publication, he also commented “If this helps provoke constructive debate,” he said, “I’ve done my job.”

King only finished the essay on the 18th, and wanted it to be published as soon as possible, so it was published on Amazon the same day for just 99¢ (now $1.57). I just wonder if he’s preaching to the converted.

Do you care what King has to say about gun control?

I'm worried about him. I'm sure a lot of his fans are gun nuts, and they may try and string him up for this. The reviews will be interesting, but he's going to lose some of his popularity for this position. Personally, I agree 100% with what's he's saying. People who won't allow us to purge the country of these awful weapons are simply selfish.

I think he left out a chapter on the moral exclusion of ppl suffering from gun violence in ghettoes.

what kind of constructive discussion comes from a name-calling polemic that recites laws proposed by gov't officials so ready for us to give up ours but not any weapon held by a govt employee? And yea Steve it can take more than one shot to take a guy down, especially if hes drugged or crazy.

This isnt an issue that can be solved by nearly outlawing guns, and it isnt one that should be window dressed by our govt so it looks as if they are serving a purpose.

Joshua Chaplinsky from New York is reading a lot more during the quarantine January 28, 2013 - 11:14am

While I err on the side of gun control, I don't feel like King's heavy-handed tone will appeal to anyone but the converted. I did buy the single, though.

Normally I don't get into an artist's politics, however, there is nothing intelligent about an arguement that just slings mud at the opposing side. It is neither brave nor clever. It's cool to have an opinion, but I think if you are going to claim the moral and intellectual high ground, it would be better to not come off as a sarcastic and petulent college freshman.

Dwayne from Cincinnati, Ohio (suburbs) is reading books that rotate to often to keep this updated January 28, 2013 - 3:40pm

What back ground in health care, law enforcement, firearms, comparative statistics, or any other scientific field does he have that we should take what he thinks seriously? How is he more of an expert on gun control then any other random fairly well traveled guy from Maine?

King has actually presented an intelligent, two-sided point of view through this article, which obviously wasn't and won't be read by most who will comment on it (or rather, those who will take the opportunity to state their view on the subject matter.)

But, from the blog articles based on the essay, this has been the point of those articles.  Provide a few snippets to make it seem like he is instigating a totalitarian rally against gun ownership, and spark a debate an uneducated outrage-based debate in the comments.

Yeah and watching a canadian debate guns is like watching a monkey try to fuck a football. What's your point?

Dwayne from Cincinnati, Ohio (suburbs) is reading books that rotate to often to keep this updated January 29, 2013 - 7:42am

@kbarker - You don't seem to understand. We aren't trying to change anything, at least 95% of us aren't. We just like to complain at people who disagree. It is our national pass time. See how Conman there is trying to complain at you? Like that, except we do that with people from here.

@Conman - I think it is more like watching a one legged man try ride a pogo stick.

Joshua Chaplinsky from New York is reading a lot more during the quarantine January 29, 2013 - 9:29am

"King has actually presented an intelligent, two-sided point of view through this article, which obviously wasn't and won't be read by most who will comment on it (or rather, those who will take the opportunity to state their view on the subject matter.)" -KBARKER

Whats intellegent about it? How is it two-sided?

If youve read it why cant u give quotes supporting yer statement, especially the one accusing the media of portraying the "essay" as slanted?