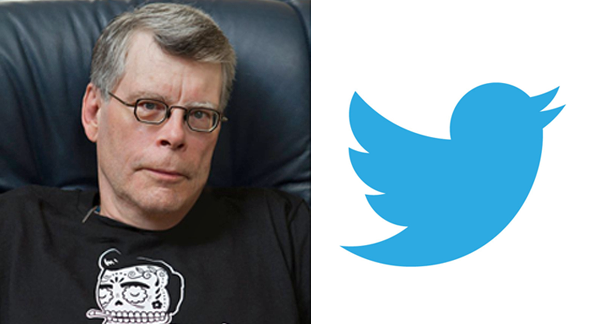 Twitter is a staple for a lot of people and there are some very high-profile people using it, ranging from Barack Obama to Oprah, Justin Bieber to Kim Kardashian, not to mention Neil Gaiman and Margaret Atwood. Now, best-selling horror writer Stephen King has joined Twitter. He got 30,000 followers in the first three minutes. He’s also warned his followers to “not expect too much”. If his first tweets are anything to go by, he’s not wrong.

Encouraged by his publisher, Scribner, to get into Twitter, he finally set up an account on Friday which was retweeted over 2,100 times in a few minutes.

His second tweet was self-deprecating, “On Twitter at last, and can’t think of a thing to say. Some writer I turned out to be.” Well, it does take some getting used to, certainly. His followers were quick to give him tweeting advice:

One person told him to tweet about what he had dined on at his most previous meal. Another one told him to attempt to be a comedian because just about everyone else attempted to go down that route. Everyone that is a King fan should know that the author is not one to follow the path of “what everyone else does”.

His choices for following started with personal contacts, including his wife, Tabitha King and Joe Hill, his son who writes well-received fantasy and horror, as well as his daughter, Naomi King, a Unitarian teacher. He’s also followed Margaret Atwood, The New Yorker and Sons of Anarchy.

I don’t know about you, but 140 characters may be too limiting for the prolific author — his fans have been warned that he “prefers books and was unlikely to tweet often”. Will you be following him? I suspect a lot of people will just to see what he comes out with.

Considering King's prose style, I imagine he finds the 140-character ceiling quite low.