Spielberg Looking to Produce New Version of ‘Grapes of Wrath’ 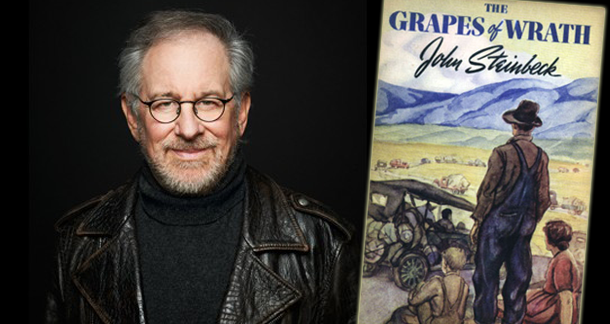 John Steinbeck’s 1939 novel, The Grapes of Wrath, about Tom Joad and his family’s trials and tribulations as poor tenant farmers forced to move off their land, was made into a movie starring Henry Fonda by John Ford in 1940. Now, Steven Spielberg, who admits to being heavily influenced by Ford’s work, looks set to produce a new version of the movie.

The rumor mill suggested that Spielberg planned to direct it, but this could be a problem.

It might be awkward turf since director Ford was one of Spielberg’s formative influences. There is some rationale to this, if DreamWorks was looking to capitalize on the 75th anniversary of Steinbeck’s Pulitzer Prize-winning novel. That anniversary happens next year, and Spielberg is next committed to directing Jason Hall’s adaptation of American Sniper with Bradley Cooper starring.

Apparently, Spielberg convinced the Steinbeck estate that a new feature film was the way to go, beating out plans that Robert Redford had for turning the book into a TV mini-series for FX.

I don’t know how you feel about remakes - I’m not usually a fan. But whether it turns out to be good or not, it’s going to be compared to the 1940 original. Will it be better? Probably not, but it’s not going to be a cheap knock off, that’s for sure.

I'm not a big fan of remakes but in the hands of Steven Spielberg I'm not too worried about his one.  With his respect for American cinema and literature I doubt Mr. Spielberg will pull a Baz Luhrman and use the title as a drawing card for one of his two-hour music videos.

If he does it, I hope he uses the book's original ending which the John Ford version omitted because of the Hays code.