Snoop Dogg, Author of "Book," Wants You To Roll It Up And Smoke It 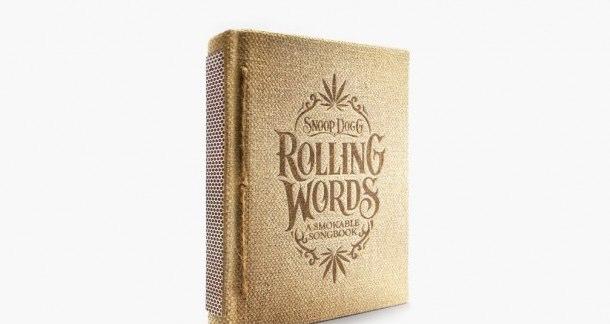 Some books are not worth the paper they are printed on. Others, like Snoop Dogg's forthcoming songbook, Rolling Words, is less about the words on the pages (which are some of the rapper's most illuminated lyrics), and more about the pages themselves. Which are made of rolling papers.

The notorious burner has never been shy about his drug of choice (hint: it's pot. Just in case you were, you know, living in a commune for the last two decades), and has often written loving lyrics about smoking. But now, those lyrics are taking on new meaning, as readers can, in fact, roll them up and smoke them.

The papers themselves aren't smoke-able (that is to say, they don't contain THC because a.) that would be illegal and b.) do you really think Snoop is going to share his stash with you?), but they are made with non-toxic ink, and come with perforated edges to make tearing them out easier.

What's Snoops motivation in making a book that encourages people to burn it down? This is just a guess, but I'd assume he has his mind on his money (and his money on his mind)--because while what's actually printed are ultra-thin rolling sheets, this book is basically a license to print money.

Dwayne from Cincinnati, Ohio (suburbs) is reading books that rotate to often to keep this updated April 6, 2012 - 1:03pm

Further evidence that Snoop Dog is in fact a evil genus.

I'd buy it just for the novelty of it.

Brings his creative energy to anything he attempts...liking Snoop more and more as he stays relevent and entertaining...