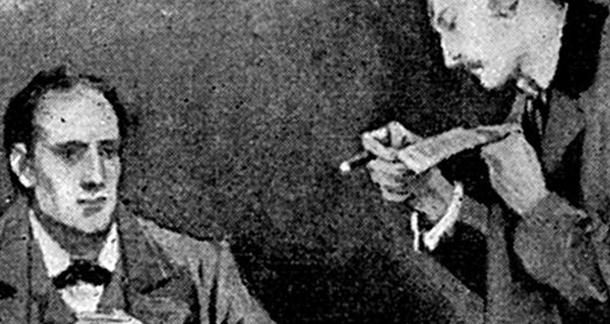 By now, we're all too familiar with long-dead authors' estates suing people and organizations for various reasons. Last year, J.R.R. Tolkien's relatives brought about two lawsuits, one against The Hobbit producers over some slot machines, the other against a professor in New Zealand, forbidding him to use the word 'hobbit' in his lecture. Also, William Faulkner's estate sought legal action against Sony Pictures for allegedly misquoting the author in Woody Allen's Midnight in Paris.

This time, however, it's an estate's turn to get sued. Sherlock Holmes scholar Leslie S. Klinger filed a civil suit last week against Arthur Conan Doyle's estate, arguing that Holmes, Watson, and all associated characters and settings are public domain, and therefore not subject to licensing fees by, as Klinger labels them, "some distant relatives" of the writer.

Klinger alleges that estate representatives contacted his publisher Pegasus Books and demanded payment for an upcoming anthology titled In The Company of Sherlock Holmes. If no licensing fee was paid, the estate threatened to dissuade major distributors from carrying the book. Klinger hopes to convince the court to "put a permanent stop to this kind of bullying."

Klinger acknowledges the rights still maintained by the estate. Quoted on Free-Sherlock!, a website devoted to the lawsuit, he said:

Does Klinger have any legal standing here? This case does raise an interesting question: should popular characters and their universes remain under the control of their creators' family, or should anyone have the right to use those characters at will?

I guess I don't understand how the public domain thing actually works-- I was under the impression that IF the estate kept up on the rights, then work didn't go into the public domain, but it appears that this lawyer believes that isn't (or shouldn't be??) the case...

Klinger is in the right. However, he mentioned that he licensed stories from the "Casebook" stories. If that is the case he needs to go to that agreement and make sure he didnt forefit the public domain use of the characters. Licensing of public domain material is EVERYWHERE on the web and on your e-readers. It literally trumps US public domain laws. License agreements are a powerful tool in the hand of the artist, but in the hands of companies and estates they are merely tools of greed.

And the question of "should popular characters and their universes remain under the control of their creators' family, or should anyone have the right to use those characters at will?" is dwarfed by the questions License agreements raise: "Why does the public feel its ok to license away their rights? Should License Agreements trump copyright law/Public Domain? How does this effect the idea and purpose of the laws being trumped?"

Ghostword from Cornwall is reading The Land of Laughs by Jonathan Carroll February 21, 2013 - 6:14am

Is the problem, due to a difference in the copyright laws in USA and Europe and the UK?  In the UK, I think it goes into the public domain 70 years after the writer's death.

@Ghost, Doyle's been dead for over 80 years now. Note that the estate seems to be asking for "Licensing fees" not mentioning copyright anywhere Ive read. In the US, anything published on or before 1920 is public domain, between then and 1960 or so there are obscure books/movies that fell into the public domain when the copytight owners failed to renew copyrights within a specific time. Most notable are the films Night of the living Dead, and Little Shop of Horrors.

There are alot of tricky areas though, like Tarzan still being a TM. There is no perpetual copyright but TMs and license agreements come close.