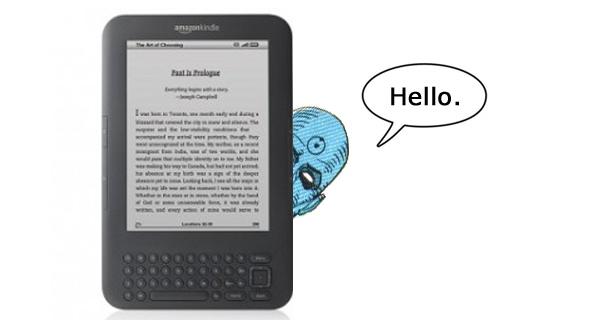 Advocates for eReaders like to tout the fact that you can use them to carry an entire library without straining your lower back, thanks to the magic of science.

But this pervasive myth has been smashed by UC Berkley computer science professor John Kubiatowicz, who said that eBooks do indeed add additional weight to your eReader.

Okay everyone, let's put on our science hats.

When you load a book to your Kindle (or eReader of choice), transistors in the flash memory use a trapped electron to distinguish between the binary digits of 0 and 1.

Though, it's only about an atogram, or 10 to the -18th of a gram. The most powerful scales we have can only detect 10 to the -9th, which essentially means that you can't put a Kindle on a scale and weigh it after adding a bunch of books, which would be cool, but still. Thanks to the wonders of particle physics, we now know that, yes, eBooks do have weight.

You always have the coolest articles Rob, keep it up!

Joshua Chaplinsky from New York is reading a lot more during the quarantine November 1, 2011 - 5:41am

Yeah man, I really enjoyed this one. Funny and fascinating.

I had to giggle when I saw Doc Manhattan. Great job.

Class Director
Rob from New York City is reading at a fast enough pace it would be cumbersome to update this November 1, 2011 - 7:07am

Thanks! I am a science junkie. One day the Large Hadron Collider will explode, creating a quantum event that destroys Snooki, who is nearby doing a book signing. That day, I will be in blog-post-writing nirvana.