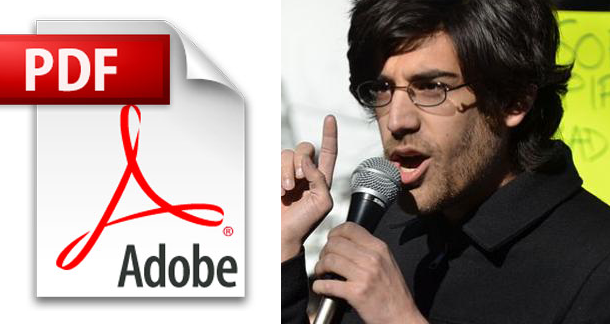 The death of internet pioneer Aaron Swartz last week has caused ripples which are growing. One positive thing (and admirable) is the number of scholars worldwide who are posting free PDFs of their papers to honor Swartz’s work for DRM-free publication in the academic world and elsewhere. A wiz-kid with a technological bent — Swartz helped establish the RSS standard at 14, co-founded Creative Commons, founded the Reddit community and set up the Demand Progress group — was only 26.

Before he hanged himself in his Brooklyn home on Friday, Swartz faced as many as 35 years in prison and $1 million in fines for allegedly bypassing the network security of MIT and online academic journal archive JSTOR to illegally download millions of academic articles. Prosecutors alleged that Swartz, a long-time freedom of information advocate, had hoped to release the articles for free online.

More details are becoming available about the giveaway and UC Davis professor Jonathan Eisen posted this:

I should say, sharing your PDFs is not necessarily enough (the license on the PDF may affect what people can do with them if they feel constrained to follow the law). It is also critical to think about the level of openness of a paper, but I will save most of the comments on that for another time. What I wanted to do here is point out various ways to share PDFs for people who don’t know how…"

Swartz was of the opinion that the information should have been free and went to extreme lengths to release it — was he wrong? A lot of people would agree with him and it’s hard to understand why a lot of academic work is hidden behind firewalls and DRM.

You can find more information about the giveaway and how to participate on Eisen’s blog.