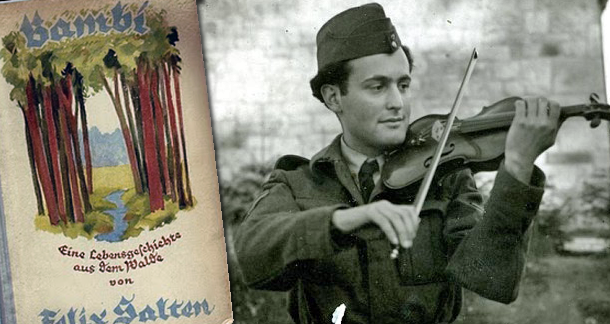 In 1938, fearing persecution by the Nazis, George Newman left Austria for England. But that’s not the whole story. He took with him over 50 first editions which, had they been found by the Nazis, would have been destroyed in one of the regime’s book burnings.

Formerly Hans Neumann, the 89 year old has returned the books, along with hundreds more, to the Austrian National Library in Vienna. He was also guest of honor at a ceremony to mark the 75th anniversary of the Anschluss, Austria’s ceding to Hitler’s Germany.

The books he rescued included a privately printed first edition of Sigmund Freud’s letters, theatrical scripts by Nobel prize-winner Gerhard Hauptmann, books by Arthur Shnitzler, Franz Werfel and Felix Salten (creator of Bambi). He also archived hundreds of letters and documents from publishers Paul Zsolnay Verlag, where his father and grandfather worked, not least of which are “poems on scraps of tissue paper smuggled from a Viennese prison cell from his father”.

The Zsolnay publishing firm archive is now stored by the Austrian National Library, in what they say is a "symbolic return". Newman's son, Patrick, who traveled with him to Vienna, said the event was "a performance of all performances" and that he was very happy that the archive has returned to Austria.

I love hearing stories like this, hearing that some of our heritage has been saved from the barbarians once again. Who knows, maybe one day this kind of destruction will be nothing but a distant memory.