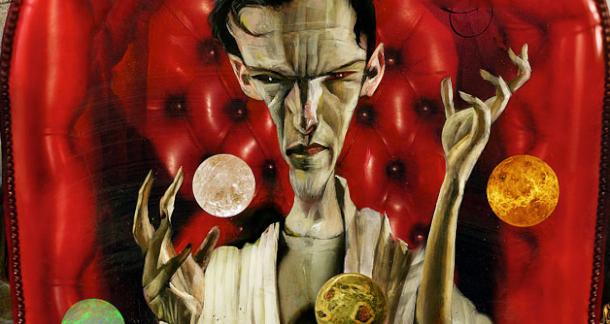 San Diego's annual Comic-Con has always been a key place to unveil new and highly anticipated graphic titles, and 2013 is certainly no exception. USA Today published a rundown of the more exciting books that will be unveiled, and boy, are they exciting.

Possibly the biggest release this year is The Sandman: Overture, Neil Gaiman's return to the series that made him famous. Illustrated by JH Williams III, this prequel will fill in a story gap in the original Sandman, in which we learn the whereabouts of the character Morpheus (read more about the plot details in Nathan Scalia's recent news post).

The first issue of Overture releases on October 30th, but Con attendees will no doubt learn a few more tidbits from Gaiman himself, who is this year's guest of honor. If you're not lucky enough to be there, however, Entertainment Weekly is previewing artwork and covers over the next few weeks. Check out David McKean's artwork for issue one, as well as one of Williams's pages, here.

While The Sandman debut is big news, horror comedy fans will no doubt salivate at the release of a new Evil Dead series called Ash and the Army of Darkness. Written by Steve Niles of 30 Days of Night fame, this new storyline will pick up more or less where Army of Darkness left off, sending Ash Williams, his chainsaw arm, and his boomstick back the Deadite-infested Dark Ages. Dennis Calero (X-Men Noir, Stephen King's The Green God of Agony web comic) provides artwork. Comic Book Resources published an interview with Niles on the new Ash storyline, which you can read here.

Hellboy makes a return this year, with IDW Publishing announcing a new deluxe edition collection called Hellboy in Hell and Other Stories: Artist's Edition, which features the first five issues and numerous stand-alone stories (more info on that over at CBR). IDW will also unveil two youth-oriented Hellboy titles, one a graphic novel featuring the titular character as a kid, the other a children's book called Itty Bitty Hellboy.

Last but not least, The Flaming Lips frontman Wayne Coyne will introduce his "psychedelic fantasy" The Sun Is Sick, a limited edition graphic novel exclusive. According to Treble magazine writer Ryan Brun, copies not sold at Comic-Con will become available at flaminglips.com on July 22nd, so if you're a fan you'd better act fast (assuming there are any left over).

I'm sure there are many more upcoming titles not mentioned here, so be sure to shout out in the comments section of I've missed anything.