Salvation Gets High Tech At UK Hotel, With Kindles In Lieu Of Bibles 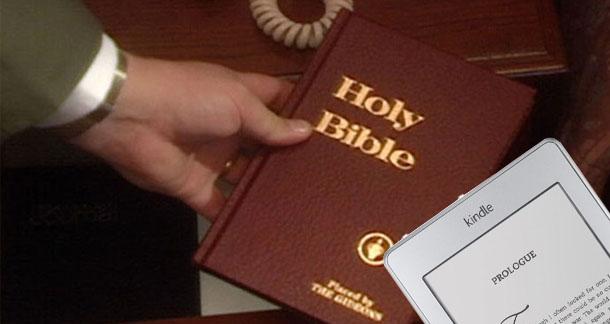 The Hotel Indigo in Newcastle, UK, has done away with The Bible in the bedstand, swapping it out for a Kindle loaded with the religious text. More, from Gizmodo:

The Kindles come loaded with copies of The Bible, and guests are also permitted to download any other religious text to the device as long as its value doesn't exceed $7.50.

If religion isn't your thing, you can download other eBooks—but non-religious texts must be paid for. If the scheme works out, the hotelier plans to extend it to the rest of its 44 hotels around the world.

Is this going to put the Gideons out of business? Will the device be secured? Which model will it be? So many questions.

I'm not a huge fan of this idea, as the Kindle isn't really conducive to flipping pages. What if I'm in the mood to read a certain passage in Ecclesiastes? I just have to sit there and tap on the "next page" button until I find it? Seems like a lot of work.

What do you think? Clever, or not so much?

There are ways to do quick searches within Kindle/Nook. Younger generations are evolving with these technologies. It is just tougher for us, who are accustomed to flipping back and forth. We just have to retrain our brains to think like the programs. I've gotten good at it with MS Word. I need more practice with Kindle.

WesFord from America (CO, NE, NC, AK, NY, WA) is reading We Have Always Lived in the Castle by Shirley Jackson, Portable Atheist by Hitchens, 20th Century Ghosts by Joe Hill July 3, 2012 - 7:57am

I don't know why they still put Bibles in hotel rooms. It would make more sense for each room to have a Kama Sutra.

Class Director
Rob from New York City is reading at a fast enough pace it would be cumbersome to update this July 3, 2012 - 8:20am

Well, if the Gideons aren't allowed to put Bibles in hotel rooms, then that's tantamout to religious persecution, because in the minds of Catholics and Christians, equal treatment is discrimination. Special treatment, on the other hand, is the only way to keep things fair.

Gimmick. That is all.

Dwayne from Cincinnati, Ohio (suburbs) is reading books that rotate to often to keep this updated July 4, 2012 - 8:11am

Rob, are there other groups trying to put religious texts in hotels and getting turned down?

Class Director
Rob from New York City is reading at a fast enough pace it would be cumbersome to update this July 4, 2012 - 8:32am

Some hotel chains are removing them. Which is great. And of course wingnut groups like the American Family Association are complaining, because people like that are never happy unless their belief in myth and legend are being forced on other people.

Dwayne from Cincinnati, Ohio (suburbs) is reading books that rotate to often to keep this updated July 4, 2012 - 8:56am

It's not really preferential unless other groups who want to put free products are being turned down. I'm not saying that doesn't happen, but a standard of "we'll take free stuff some folks want" isn't really special.

Dwayne from Cincinnati, Ohio (suburbs) is reading books that rotate to often to keep this updated July 4, 2012 - 8:59am

I just reazlied the next step of the Kindle in motels will be the free samples of the first 10% of Twilight.

EricMBacon from Vermont is reading The Autobiography of a Corpse July 4, 2012 - 11:29am

How can they keep them from being stolen. You can turn the wifi or deregister the device and sideload ebooks right into the kindle. It doesn't take a genius to figure out how to get a complimentary Kindle at this hotel.