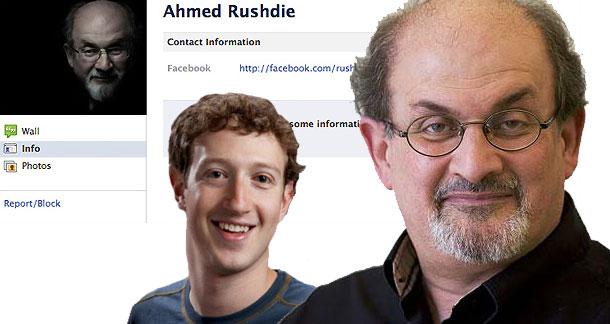 Don't you just hate it when you wake up to a bunch of Twitter posts telling you about how Mark Zuckerberg is effing with your Facebook?  Well, that's exactly what happened to author Salman Rushdie, and he was totes irritated about it.

In the classic Facebook fashion of "shoot first, ask questions later," Rushdie's account was deactivated and his name changed to Ahmed (which is on his passport). A proof of identity request was also issued.  Of course, Salman has never gone by his first name, and he was quick to point that out. The Twittersphere backed Rushdie up and the whole thing was resolved in a matter of a couple hours.  He posted:

Facebook has buckled! I’m Salman Rushdie again. I feel SO much better. An identity crisis at my age is no fun.

This, of course, leads to the obvious question: who the hell is Facebook to tell us how to represent ourselves?

Call it a security measure. Play the "their field, their rules" card if you want.  More than anything, the guilty until proven innocent approach is what chaps my ass.  I realize that Facebook is trying to maintain a certain level of integrity that MySpace never did and Twitter currently doesn't, but there's got to be a better approach.  Regarding Rushdie specifically, Facebook gave the standard “We apologize for the inconvenience this caused him" line, but has yet to offer an explanation of why it actually happened.

Hopefully, this is the end of the identity bullshit for Rushdie.  First he had to lobby Twitter to get his name back from a dick imposter and now this.

Anyone rethinking the use of a pen name?

Pretty bizarre, and I don't even mind the name. What annoys me more is those old friends from your high school (at least in my case) that haven't grown up yet. 'Gucci Barbie,' 'Moe Betta Butta,' 'Hate On it,' etc.

But in the end, hey, you are expressing yourself. Many are just fun to laugh at.

Yeahhh, but it's Salman Rushdie isn't it. Nothing enrages an academic more than childishness. It's their kyptonite. I'd pay to have someone at face book do it again. Then change his name again (to something like Sam Rushcoffee. his name is like you've dropped a box of scrabble anyway!