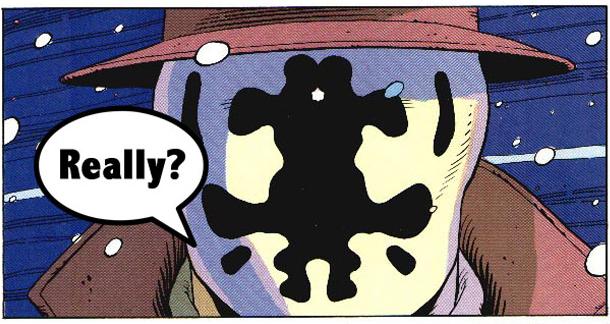 The rumor mill is reporting that DC Comics is considering a revival of the Watchmen franchise, bringing back some of the characters for prequel comics.

Comic book fans, I'm going to give you a second to let that soak in.

Non-comic book fans, a little background: Watchmen was a 12-issue mini-series, first published in September 1986, that told the story of realistic superheroes on an alternate history Earth that's edging toward nuclear war. I think I can say, without dispute, that it's one of the greatest comic books ever published. In 2005 it appeared on Time's "All-TIME 100 Greatest Novels" list. It was the only graphic novel to make the cut.

Alan Moore, the series' writer, feels a great deal of animosity toward DC Comics (and the comic industry as a whole), mostly related to creator's rights and merchandising. There is zero chance of him returning.

Apparently the idea is that four characters from Watchmen will be spun off into their own prequel miniseries. Andy Kubert will draw one, and Dave Gibbons, the artist behind the original series, is reportedly involved. Some other names that have been dropped: J. Michael Straczynski, John Higgins, J.G. Jones, and Darwyn Cooke

While rumors about bringing back the Watchmen pop up every now and again, it seems as though this particular instance made the rounds back in October.

I'm split on this. In one sense, I don't think a bunch of other comics are going to tarnish the original. Raiders of the Lost Ark is still one of the greatest movies of all times, and hasn't been diminished by the existence The Kingdom of the Crystal Skull, which was a bad, terrible, horrible movie.

At the same time, sometimes it's better to leave well enough alone. And Watchmen is much better than 'well enough.'

What do you think about all this?

P.S. Yes, Watchmen was also a film released in 2009. I still haven't reconciled how I feel about it, even after watching the 87-hour special edition cut.

This isn't really news or a rumor. They announced this officially around the time the movies come out. Although I know they can be wishy washy on this stuff, so maybe it got shelved and is reemerging in rumor status?

You are right that it won't ruin the originals. At the same time, wouldn't more Watchmen be kind of cool? And they are DC's characters, no matter how much Alan Moore wants to bitch about it. They should have done this years ago before the legends and cults around the series had decades of weight behind it.

It's just another thing for comic fans to flame message boards about, and one of the reasons I can't read superhero comics anymore.

I would rather see this version I felt better about the Watchmen film the second time around. I think even if you went into it knowing it wouldn't match the novel, you subconsciously had high hopes. A rewatch really helps perspective.

I hope it's better than the movie. The movie was a poor attempt at franchising. Halfway through it was cool but immediately after the dream sequence it was like a huge blockbuster studio took out the second half of the movie.

I knew going into it that the producers would be too stupid and naive to portray how the heroes aren't actually heroes (just like in Clive Barker's "Nightbreed" how the monsters are predominantly heroes). So by the end of the movie they portrayed the heroes as "misunderstood" rather than standing for all of the sins of the Western world: racism, class-war, etc. All of these things that under the Reagan era were misconstrued or twisted as being "good". I didn't like that part at the very end.

This is even portrayed in the bittersweet part where The Comedian says "We're saving them from themselves." Even that did not execute the paradox of the protagonists of the book actually being quite sinister. (I have to re-read the comic. From what I remember that line/scene was added to the movie for audiences that the film-makers or distributor assumed were too stupid to understand the "hero/villian" paradox being a statement about problems with hero-worship that happen with hero-worship of politicians, etc.)

Also they didn't use the ending to the original comic book which is the best ending I've ever seen in a book (comic or even novel) or movie EVER! :P That twist was epic. (Read the comic before you see the movie if you don't want a spoiler. They omitted that major twist from the film entirely.)

The part where they had the dialogue from the last few panels of the book really sucked. I thought that was poorly directed and executed.

I really didn't like how the bullet-time really screwed up the tone for the second half of the film. The second half fell pretty flat actually in a lot of ways, in my humble opinion.

Not to mention the part where Nite Owl went on a surprise rescue to aid the people in the fire in the city project. The back-story behind the similar scene in the comic book was that all of the superheroes were licensed. They could not fight crime without this government-mandated license once one of the first superheroes went too far. This is addressed very early on in the comic but once again they assumed audiences would be too simple-minded to comprehend any of it so all of that was taken out and replaced with bite-sized morsels of backstory which were a lot less sympathetic to the characters and portrayed a lot less. So none of this was addressed as why it was risky for Nite Owl to come to the rescue in that scene from the second part of the film.

This is elaborated on even further in the book's back-story of Doc Manhattan. (Other stuff they assumed would be too "hard" to understand for a mainstream film.) Doc Manhattan was let off the hook somewhat for the superhero licensing because the government was using him as a "humanoid atomic bomb" to win the arm's race. (This is also addressed in the Alan Moore interview at the end of "Absolute Watchmen" deluxe edition.)

Then there were the parts in the book about an ex of Doc Manhattan's alerting him and the public to him causing cancer- because he's radioactive. (Talk about a bad VD.) This was addressed briefly in the comic but it set up a lot more sympathetic details about Doc Manhattan's feelings of shame and so on.

So those are a lot of the reasons why I wanted my money back once the second hour-and-a-half of the movie started.