Rumored NYC Apple Event To Focus On eBooks And Sef-Publishing? 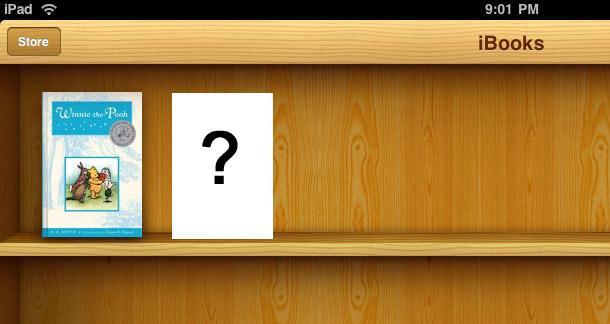 Apple is rumored to be planning a press conference for the end of the month, and word on the street is that it's going to focus on eBooks.

The tracking of Apple rumors is practically a full-contact sport, and the eventual reality never turns out to be as spectacular as the bloggers imagine (see: iPhone 4S), but there's still some interesting gossip making the rounds on the internets.

According to Goodreader, Apple is finally going to announce a digital self-publishing platform, similar to the one offered by Amazon. This makes a good deal of sense. Two of Amazon's best-selling books for 2011 were self-published. As of now, Apple doesn't make it easy for self-published authors, forcing them to go through third parties like Smashwords to get listed in the iBookstore. They're leaving money on the table, and it stands to reason they would want to get into the self-publishing game.

Other sites, like Macrumors, seem to think the event will address digital textbooks and education. Also sensible. I love my Kindle, but it just doesn't make sense for use as a learning tool. The iPad offers a much higher degree of interactivity. And all the pretty colors and moving stuff! Given that it has more power under the hood than the Kindle Fire, this could be a section of the market that Apple could corner, by becoming the go-to classroom tool.

Time will tell. The event hasn't even been made official, although a number of reputable blogs and news sites have reported on it. And while I'm sure you're all crossing your fingers that this is actually about the iPad 3 or something, the rumored location of the press conference (New York City) pretty much guarantees it's not a hardware announcement. Apple likes to keep those in their backyard on the West Coast.

Or I could be completely wrong about all of this, which is always a possibility, and part of the fun of reporting on anything Apple does!

I'd like to take an informal poll here, though: How many of you use iBooks? Even before I got my Kindle, I bought all my eBooks through the iPad's Kindle app. iBooks never really grabbed me, and their selection is pretty anemic compared to Amazon. Am I missing something? Anyone here prefer the iBookstore?

I only use iBooks for the occasional programming book that I buy. The larger screen makes it a lot easier to toss in my little stand on my desk while I work.

Everything else, I read through Kindle.

Being an owner of a Nook Color, I've spent some time browsing the PubIt! eBookstore.  Looks rather easy to upload your work, if you wanna self-publish.  Much like Amazon's option.

But when it comes to text-books, B&N has been a bit misleading.

If you want to rent or buy text books through the Nook store, you can't read them on your Nook!  You have to download and install the Nook Study software and install it on your PC or Mac.  Then you can read text books.  So for everyone who bought a Nook Color or Tablet for school...sorry.

But if you're like me, the Nook Color is perfect for reading everything else.  I couldn't be happier.

I can't stand reading a book on a LED screen. Has to be e-ink.

Ebooks are the future. I mean I have the kindle app on my cell phone so I can read dozens of novels on my phone instead of carrying them around.  It is very convienient.  This is how more unknown writers will break into the industry too, the stigma over self-publishing and ebooks is going to fade because if mainstream publishers aren't willing to take chances on edgier artists but publish James Pattersons 50th novel or Sue Grafton's next alphabet themed series of books then this is the closest that novelists can take it to the streets so to speak.  Instead of trying to sell chapbooks at poetry readings or some bs like the old days. This is personally why I am a fan of the anthology as well because it introduces you to a larger group of writers and lets you sample their work and seek out more if they have it. People create the future not executives in a boardroom.  We need to decide which trends are popular and not let the mainstream media tell us.

.1. LINK BUILDING -We are business people and we know how to get your

business presence at top in search engines. First we promote our

Building Services to our valuable clients.Link Building Company Are

Provide Best Quilty link For Any Website . We Are Provide One Way