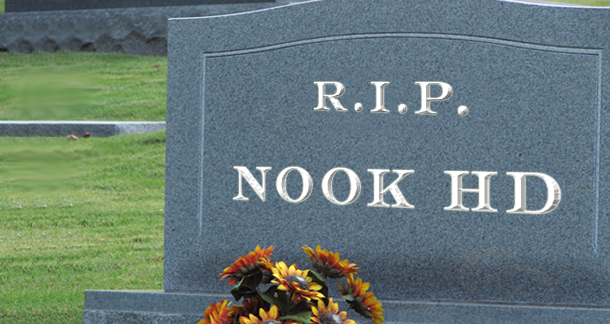 I have to admit I haven’t really understood what Barnes & Noble have been doing lately: their attempts to compete with Amazon, Apple, Samsung, et al. in the tablet market just seemed, well, pointless in so many ways. After several “disastrous quarters”, the announcement this week that the largest retail brick-and-mortar bookseller in the U.S. is getting out of tablets is not really a surprise, as they’ve been struggling to compete since last year. And not doing a very good job of it.

They’re not getting out of eReaders, just tablets — it’s an expensive business, you know.

The company will sell off its remaining inventory of Nook HD and HD+ tablets through the holidays and will not [offer] another generation of tablets. Barnes & Noble will, however, come out with a new set of dedicated eReading devices. Like Kobo, which invested heavily in e-readers when the rest of the industry was going tablet-crazy, B&N is planning to zig while everyone else zags – everyone but Kobo, that is.

I guess I can see the point (even though the pundits are all saying we’re moving to reading on tablets). Even in the UK, Kobo is everywhere, barring two of the book chains, one of which has partnered with Amazon and the other with, surprise, Nook. What isn’t a surprise is the move away from tablets when you look at their recent performance.

The company spent the fourth quarter on a discounting blitz for its Nook devices and content, announcing new deals and offers on almost a weekly basis. It also spent time signing several deals to move its Nook distribution system on to rival tablets — most recently the Nextbook tablet and the kids-focused Fuhu nabi, which will now both come pre-loaded with Nook apps.

Should they carry on as they are or try harder to be Amazon? I think the verdict’s still out on that one, even if the consensus is that change is necessary if they want to survive. So yes, RIP Nook HD.

Ryan Hartman from Philadelphia is reading The Neverending Story by Michael Ende June 27, 2013 - 8:15am

I hate reading books on tablets.  I much prefer reading on an e-reader like a Kindle or Nook.  I stare at a computer all day, I don't need to be staring at yet another backlit device during my leisure time.  I like the simulated paper look of the e-ink.  It's just easier on the eyes.

Not to mention being able to read outside in sunlight is nice.

It is too bad to see some lower-price tablets go the way of the dodo but hopefully it will lead to better e-readers.I have a Kobo Aura and it is the best purchase I've ever made.  Unfortunately, getting it delivered was a nightmare.  The one thing that B&N has over Kobo is a brick and mortar place to take a device when you have problems.

I have the NOOK HD+. Best tablet out there. Comes with Google Play app which means, wait for it...you can install the Kindke app. Best of both worlds. What a shame. There goes another Betamax.

If the Nook failed it wasn't from lack of trying.  Anyone that's ever worked a Barnes & Noble information desk or kiosk knows that it takes barrels of sangfroid to deal with all the dumbass off-the-street tech support issues that come walking through the doors plus keep the incessantly ringing phones at bay plus sell more of the damn things. At the same time of course those paper things called books demand attention.

The Nook itself is an honorable device!  Having worked at both Barnes & Noble and the late Borders, all I can say is, the difference in the aesthetic and workability between the two companies' tablet/e-reader kiosks was breathtaking.

Yeah, in hindsight they were trying too hard to out apple Apple, but it's not like anyone knew pre-holiday season '12 how disastrous this would turn out to be.  They had to jump into the sandbox along with everybody else to find out. These guys are capable of learning from their mistakes. They'll figure it out and move on to the next thing. After all, they remain the only brick and mortar game in town and genuine diamonds have a way of hanging on to their value.