Return Of Serenity: Dark Horse Comics To Bring Back "Firefly" 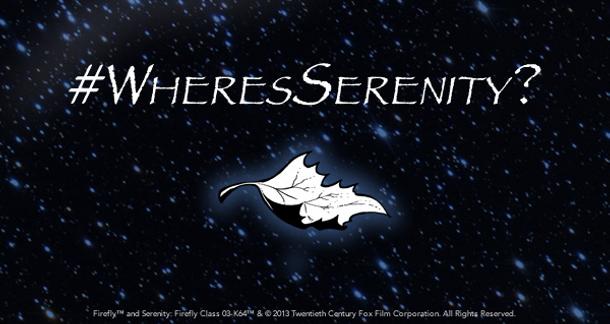 Okay, I know I'm going to get flak as a sci-fi guy for saying this, but I have never seen Firefly, and until recently, had no intention of doing so.

Yes, I'm aware that it's still mega-popular even a decade after it was canceled after only a single season. But perhaps that's exactly why I've always been hesitant to watch it. I hate, hate when stories get canceled before they officially wrap-up, and I'd honestly rather not watch an excellent show that never reaches its conclusion. There was Serenity, but still.

On August 23rd, Dark Horse revealed an interesting graphic that simply had the hashtag "#WheresSerenity?" Above the image was the following press release:

Joss Whedon's beloved Firefly series and Serenity film's lifespan may have been short-lived, but managed to produce one of the most dedicated fanbases in the history of modern science fiction. Dark Horse is proud to be able to keep Mal and his crew flying with new comics and products. Look for the hashtag #WheresSerenity over the next few months on our Twitter, Facebook and Instagram pages for exclusive news on the future of the franchise at Dark Horse!

This isn't new territory for Dark Horse. They've done quite a few Serenity-themed comics and graphic novels, but these have mainly been single stories, not really the continuation of the series that many (terrifyingly) loyal fans have long hoped to see. And while information is admittedly scarce now, the press release certainly seems to imply that there is something bigger in the works.

I know that fans of the show have been holding out for someone to pick the series back up, but would this comic book series satisfy your thirst for more space cowboys?

Dwayne from Cincinnati, Ohio (suburbs) is reading books that rotate to often to keep this updated September 7, 2013 - 3:54pm

I'll catch a lot of flak for saying this, but don't worry you aren't missing much.