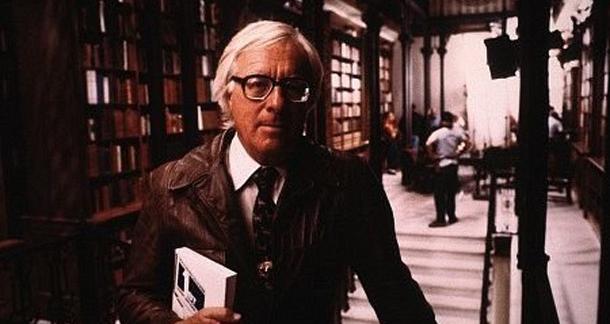 Ray Bradbury, author of Fahrenheit 451 and The Martian Chronicles, died this morning in Los Angeles at the age of 91. He was a celebrated author of speculative fiction, having written 11 novels, and dozens of plays, screenplays and short stories.

His grandson, Danny Karapetian, shared this with io9:

"If I had to make any statement, it would be how much I love and miss him, and I look forward to hearing everyone's memories about him. He influenced so many artists, writers, teachers, scientists, and it's always really touching and comforting to hear their stories. Your stories. His legacy lives on in his monumental body of books, film, television and theater, but more importantly, in the minds and hearts of anyone who read him, because to read him was to know him. He was the biggest kid I know."

For me, this is very sad, borderline devastating news. Fahrenheit 451 was the first book I ever read that showed me how powerful the written word could be. I revisit it once a year, and I'm always struck by the beauty in its simplicity, and the power of Bradbury's conviction.

This book was my personal nexus point--the one that sparked my love of reading, and set me on that long road toward being a writer. Despite Bradbury's age, I always held out some hope that he'd do a lecture, or some kind of event, and my path would cross with his. I've got this thing, where I like to meet and shake the hands of the authors who've inspired me. I feel like I owe Bradbury a debt, and now I can't pay it.

Except to say that, tonight, if you've never read Bradbury, pick up one of his books. Go to the bookstore on the way home. If you can't get to a bookstore, download the eBook version of Fahrenheit 451, which Bradbury probably hated, but was still released last year. And if you have read Bradbury, re-read a favorite. There's no better way to honor his memory than that.

This was very devastating for me. I read Zen and the Art of Writing when I first started writing fiction. By the time I was done with that relatively short book, I couldn't wait to find a keyboard and start writing. Any time I need an emotional boost as a writer, I read a little bit of that book. I became a huge Bradbury fan. His writing technique and style served as the basis for my method starting out. I can only hope to be writing as long as he did.

It's hard to imagine a writer who loved writing more. He'll be sorely missed. One of the last literary giants is now dead.

“What are the best things and the worst things in your life, and when are you going to get around to whispering or shouting them?” - Ray Bradbury

Glad we had him for 91 years. Great writer. His short story "Heavy Set" remains one of the best of the 20th century...

All Summer in a Day and The Luggage Store (I think that was the title) were favorites of mine. When it came to thought-provoking, though, nothing could beat the one with the mechanized house that keeps running even though everyone's long dead. I can never remember the title of it, but my high school English teacher had a slide show version with illustrations.

Good God. I haven't been hit this hard since Crichton died.

What a terrible loss for his family and the literary world.

His contributions to literature cannot be measured by any bibliography. He was an inspiration to a lot of people, myself included.