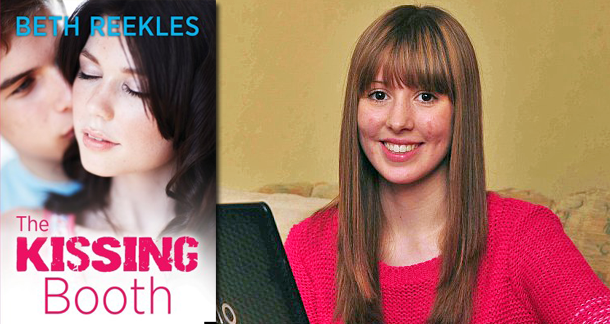 Don’t you just hate them? You know who I mean, the wunderkind who attain awards, achievements or recognition at an age when most of us were still wondering what the hell girls were about… oh, just me, then? Well, this might make you grind your teeth: 17 year old Welsh high school student Beth Reekles has just signed a deal with Random House for a teen romance trilogy.

Tired of vampire and werewolf books, Reekles has been publishing her books on Wattpad for the last couple of years, chapter by chapter, since she was 15, starting with The Kissing Booth. Her books have had millions of reads and in 2011, she won the “Most Popuar Teen Fiction” award on the site. Random House got in touch with her, wanting to publish The Kissing Booth last October and Lauren Buckland, her editor, was full of praise for her writing, saying

"The book was in fantastic shape,” she says of the unedited version Reekles had uploaded. “It was quite a new thing for us to find such a talented writer on an online platform — and who’s 17.”

From Newport, Wales, Reekles still has homework to do and exams to study for, particularly if she wants to reach her goal of studying physics at University, so it hasn’t really gone to her head. If anything, she feels her age has helped her.

"I think one of the reasons why people like my book was because I’m a teenager writing about teenagers,” she says. “So I know that a lot of teenagers might just swear for the hell of it, or the kind of things they might say, or how much schoolwork there is, or how they might act differently in school around their friends than at home around their parents.”

And her parents just thought she was on Facebook! Is 17 too young to sign an author? Or is it just me?

A teenager taking a genre marketed toward her and making something of it irritates me a lot less than having middle age women writing about teenagers... I say good on her. Who can speak to YA better than an actual Young Adult?

Dwayne from Cincinnati, Ohio (suburbs) is reading books that rotate to often to keep this updated March 26, 2013 - 12:41am

Seriously though, it sounds like she rights fun books so she gets more reads. Pretty straight forward, best of luck.

Gerd Duerner from Germany is reading Rebecca of Sunnybrook Farm March 26, 2013 - 9:17am

I'd say it depends on the quality of the book - maturity, contrary to popular believe doesn't come from growing old. But I can see no reason why a seventeen year old (or fifteen when she started out) shouldn't be able to write something worthwhile.

And I'd agree that it very likely is a lot easier for a teen to sync with a teen readership.