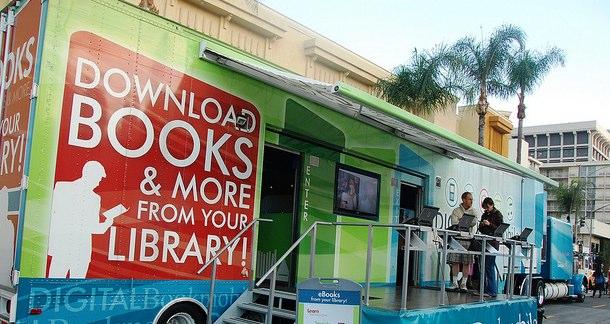 Via the Digital Shift:

Amid this god-awful economy, one of the biggest losers is libraries, who rely on public funding, but rarely get it. Sometimes, they lose it altogether, in spite of the fact that eBook borrowing has gone through the roof. Which is why it's a bummer to see big publishing houses getting in line to throw them under the bus. First, Penguin pulled away from Overdrive, dramatically limiting titles available. And now, Random House's new prices for libraries have taken effect--which is going to cost the already cash-strapped lenders up to three times the amount it was before.

Initially announced at the beginning of February, the new prices were part of Random House's agreement to continue allowing libraries to purchase and lend books via Overdrive. Which put librarians in a sticky position--drop all Random House titles, or pay a lot more for them. They chose the latter.

According to the Digital Shift, the price hike is dramatic and noticeable, and will definitely impact which digital titles libraries can carry. One librarian "bought Eisenhower in War and Peace by Jean Edward Smith for $40 via OverDrive. On Thursday, the price was $120. The print version of the book, with the library’s discount, is a little over $20 (it retails at $40). For Blessings by Anna Quindlen the eBook price went from $15 to $45."

Which is especially tough for libraries because, unlike just about every other economic model in existence, they are one of the few services that can't really pass that increase off to customers in any way other than cutting staff, shaving down hours, and taking furlough days.

Libraries and eBooks seem to be a perfect fit--working with libraries helps make eReaders more sympathetic to hardcore book geeks, and being able to carry digital titles helps keep libraries relevant to everyone else, which can ensure funding--but if publishers continue to not play along, there's a definite concern that everyone will lose.

Image: The Digital Bookmobile, courtesy of the Long Beach Public Library on Flickr