Ralph Steadman: 'I thought Hunter S. Thompson didn't like me' 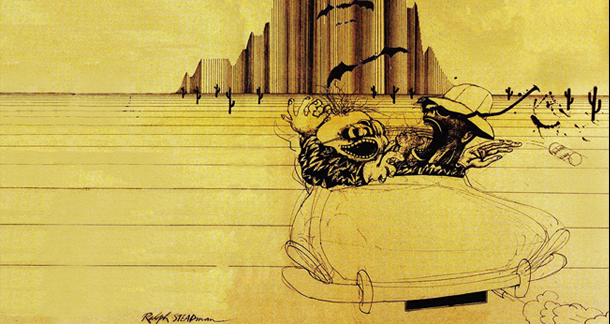 You most likely know Hunter S. Thompson from books like Fear and Loathing in Las Vegas and his reputation as a drug and alcohol riddled madman, not to mention his "gonzo" style of journalism. And if you’ve read Fear and Loathing… (or seen the movie with Johnny Depp) you most likely know of his long-time collaborator and friend, illustrator Ralph Steadman. In a recent interview for The Telegraph, Steadman talked about their relationship and how he thought Thompson didn’t like him when they first met. It was when they were working on a magazine article about the Kentucky Derby in 1970. Thompson would write the story and Steadman would illustrate it.

"I was told that the writer would be this 6ft 5in ex-Hells Angel with a shaved head who would be carrying a doctor’s bag. I was given his name, Hunter S. Thompson, but it meant nothing.” Their first meeting did not go at all well. They spent three days trying to find one another, then when they did, Thompson took an instant dislike to him. “I thought he was pompous,” he recalled later. “I didn’t like him and I didn’t want him around.” Reluctantly, Thompson took Steadman for a drink at Louisville’s poshest club. There, as he always did, Steadman started drawing. “Hunter kept saying, 'For God’s sake, stop your filthy scribbling.’ It was the first time I realised that a drawing could be an offensive personal comment."

Unsurprisingly, they upset the locals and had to leave the club in a rush. They went on to work together on four books and became lifetime friends, a friendship only cut short when Thompson killed himself in 2005. Jann Wenner, publisher of Rolling Stone and the person they did a lot of their best work for, once said he thought Steadman was the crazier of the two, which is sorta borne out by their antics at the 1970 America’s Cup.

When the two of them went to cover the race in Newport, Rhode Island, in September 1970, it was Steadman – admittedly high on psilocybin at the time – who suggested they row out to the Australian yacht and write “F--- the Pope” on it in large, spray-painted letters. If it hadn’t been for a vigilant security guard, they might well have made it.

Wild days far behind him, other than in his continuing work, Steadman admitted that Thompson’s death hadn’t really been a surprise, “…but I think in retrospect it depressed me more than I anticipated. His death left a big gap in my life.”

Proud Too be Weirrd is out on the 22nd of November.