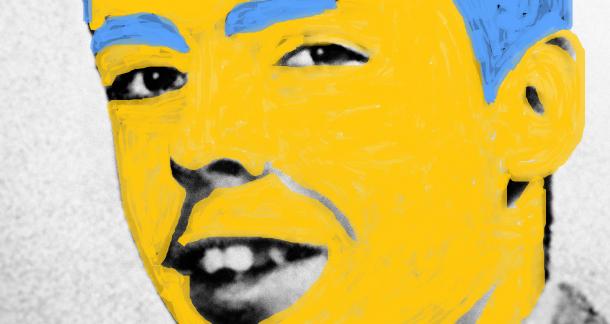 A Simpsons pop-in has become a common occurrence for celebrities, but few of these appearances are as wonderfully weird as Thomas Pynchon's. Not to mention that the author of Gravity's Rainbow and The Crying of Lot 49 took the time to punch up the script.

Simpsons executive producer Matt Selman released a picture of Pynchon's handwritten script notes, which are framed and hung because hey, it's not every day a National Book Award winner adds a couple puns to your script.

Most of Pynchon's additions were plays on his various book titles, although the most endearing is a note. A circled asterisk next to the proposed line "Homer is such a fat ass" points to Pynchon's handwriting at the bottom of the page:

Sorry, guys. Homer is my role model and I can't speak ill of him.

What makes Pynchon's appearances on The Simpsons so interesting is the fact that they play so hard on Pynchon's private, sometimes reclusive lifestyle. He shows up in three episodes, and in each one he's drawn with a bag over his head. In his real life, he doesn't speak much about himself, there are very few pictures available of the man, and he's also hesitant to reveal his location. One Playboy article did reveal some personal information, including that Pynchon had personal issues with his appearance and had serious surgery done to fix his teeth.

All this privacy resulted in some pretty excellent conspiracy theories, including that Thomas Pynchon was J.D. Salinger, that he posed as a semi-homeless lady to write letters to a California newspaper (there's a whole book about this one. See below), and that he was, in fact, the Unabomber.

If you're wondering whether you should read Pynchon, this flowchart might help. Although unless you're an English major or a masochist (which seem to be equated here), the answer will be No.

What Made 'Roseanne' Great

John Swartzwelder Is The Funniest Writer You're Not Reading