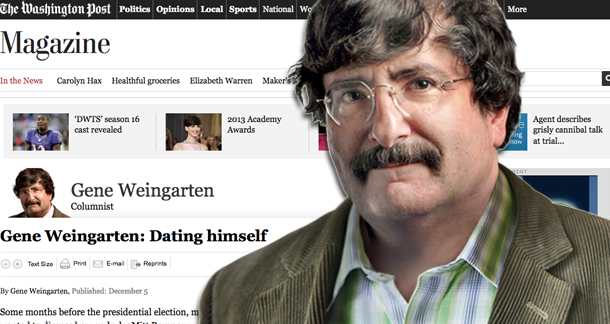 One of the most common questions authors get asked is “where do you get your ideas?” As far as I can remember, I’ve heard everything from “the glove compartment of my car” to “a little man in China sends them to me”, but this is a new one on me: “out of a hat”.

Gene Weingarten, Pulitzer Prize winning columnist at the Washington Post, has apparently done just that. His new book due out in 2015 will center on a single date in U.S. history, namely December 28, 1986. Entitled One Day, the book

promises an in-depth look at one day in the life of the people of the United States as it happened, 'but from high above, covering matters great and small – wide-angled, panoramic, with the added illuminating dimension of time.' The date, chosen at random by a waitress and two children at an oyster lunch (each drew a number from a hat: one for date, month and year), is the starting point for a book that will study 'the universal power of humble truths,' says the author.

With books like The Fiddler on the Subway and I’m With Stupid under his belt, it could be an interesting read from Weingarten, probably best known for his humorous column Below the Beltway.

While not, strictly speaking, a random subject, I guess this is one way to shake an author out of a comfortable writing habit. What do you think: should more writers try a random element in their writing?