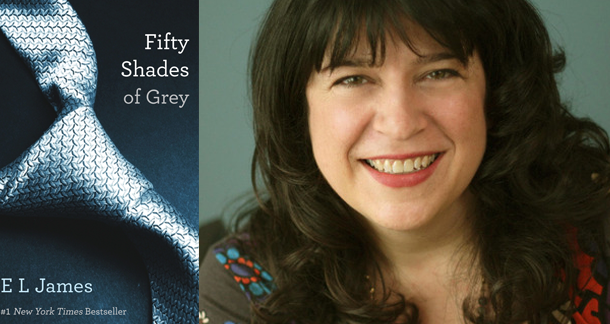 Publishers Weekly, the bible of the American book trade, has named Fifty Shades of Grey author E. L. James its ‘publishing person of the year’ for “shaping and, sometimes, transforming, the publishing industry”. The accolade has never been won by an author before; it is usually given to people like Jeff Bezos, founder of Amazon.

Citing the staggering number of copies and her influence on other authors (if you haven’t seen the knock-offs yet, you’re obviously not looking very closely), Publishers Weekly had this to say about the award:

Not unsurprisingly the U.S. press has been less than kind about giving the title to James and the comments on Publishers Weekly’s site were even more scathing:

'I want to die. Or kill. Or just eat some cake until this literary pain goes away.' wrote one. 'Seriously? Is this the best you guys can do? Hilary Mantel becomes the first woman to win the Booker Prize twice and you pick EL James? Lay off the eggnog and rethink your decision,' said another.

Did James just get lucky? Probably. Did she change the face of publishing? Well, not exactly, unless you count all the imitators looking to capitalize on her success - which we get with each new successful author. Just look at J.K. Rowling’s Harry Potter series.

What scares me is that PW thinks 30% of her readership is MEN. Really?

Class Director
Rob from New York City is reading at a fast enough pace it would be cumbersome to update this December 3, 2012 - 10:59am

Being the most influential person doesn't mean you have the be the most good influential person. Hitler was the Time Magazine Person of the Year in 1938. He may have been a huge dick, but no one had a greater impact on the world that year than he did.

To be abundantly clear, I am not comparing James to Hitler. I'm just saying that if the criteria is influence, independent of the perceived result of the impact, then James is a fair pick. Who else had a bigger footprint in publishing this year?

I've been 'chatting' with a female writer on Wattpad.com, who is an established author for Penguin UK. Her and her co-writer were hired by Penguin to develop a series to go head to head with, and as she put it, 'blow 50 Shades out of the water.'

Apparently this isn't the first time she has been approached to write pieces to cater to what's hot at the moment.

I haven't read 50 Shades, but those who have, have told me that the sex is done decently, but the overall writing has something left to be desired. Getting back to my friend over on Wattpad, they wrote the first book to compete with 50 Shades in just 5 weeks. Keep in mind, that's two writers working on the same project, but still...

Oh well, so long as they're getting people to pick up a book rather than watch television that is something positive in my book.

Gretel (Children Of The Sun) Book One

The sex is not done decently, nor is anything else. Complete garbage.

What Micheal Riser said. This is the kind of headline that makes me die little inside.

R Mathew Simmons, I actually forced myself to read the first book in the series and five weeks is ample time to spit out all three books seeing as they were a first-draft regurgitation of the Twilight novels.

What is phenomenal about them is the author's audacity to publish 50 Shades as finished, no literate person would have put their name on it.

She has not just lowered the bar, she dug it a trench and won an award for it.

Joshua Chaplinsky from New York is reading Stories of YOUR Life December 3, 2012 - 1:31pm

From a publishing standpoint, she is deserving. In that respect, her influence is not bad influence. This honor has nothing to do with quality of art, so there's really nothing to get mad at here.

I haven't read it, assume it's garbage, and suspect she should be reprimanded for some form of plagiarism, but this:

I cannot disagree with. Poorly written fanfic gets published to international fame? Yeah, I'd say that's pretty impressive. And hey, it's for the year, not forever. Maybe in 2013 someone will influence the industry in a more positive way.

DaveShepherd from Calgary is reading No Country for Old Men December 3, 2012 - 7:22pm

@Michael -- I agree, but popular product is more influential than something of higher quality that is lesser known. Twilight had a huge impact on what gets published, as does 50 Shades of Gray. Like it or not, publishers/agents are looking for the next 50 Shades.

On an annual basis, popular trumps quality. However, as time goes on, I like to think that quality wins out. I like to think people won't read Twilight or 50 Shades of Gray twenty years from now. But maybe they'll pick up something good from this year -- and maybe that will inspire them to write.

Someone name a more "impactful" person in the publishing world in 2012. Maybe some guy who approved a merger?

Erotica going mainstream is a big deal, or was this year; maybe it will have gone back to the shadows by the next time they give this award, maybe not.

Though its "mainstream" success is probably due more to the hype machine than to the author. (I'm assuming it's not really very good.) It could have sold just as many copies as it had before it became "news," and if no one actually made a news story out of it, most people would not be any the wiser. We might look at the Amazon rankings and wonder what the hell it was, but without reportage, it'd go no further than the water coolers and nail salons. It would not be reified into "phenomenon" status. People would have one less thing to rail against.

Think of the home shopping networks. If you believe the announcers, they sell thousands of doodads in five minutes. Why won't someone do a news story on the fact that a bunch of people I've never met buy things no one I know actually want?

Good for her (I'm trying to be positive. Even if this makes me want to cry tears of bitterness and resentment). I thought this would fade away, but I can't escape it. People are still raving about these books, despite their shitty quality. I read somewhere that Christian and Anastasia are climbing in baby name popularity as well. It has been predicted that they will be the top baby names of 2013. Is it wrong that I wrote a book that takes place in Tacoma, WA and I'm considering changing the setting because of these books? Oh well, I need to get off of here and work on a massive literary analysis that is due tomorrow.

I think it can all be summed up by asking: what did you do to "shape and sometimes transform" the publishing industry? If the answer is, "I wrote a book," then you didn't do any of that. If you took an interesting course in publishing it, did something unique or new in the industry, if you changed the way people look at ebooks or self-publishing or print publishing by virtue of your own efforts, then yes, you lived up to that. She didn't. She wrote something and sold it, and really did nothing else beyond that, at least that I'm aware of. That does not constitute shaping or transforming publishing. It constitutes writing a book that you sold to a publisher who sold it to lots of people. Granted, the subject matter was erotic so that's a bit of a breakthrough, but her success is really only based on the fact that she was riding someone else's coattails and cashing in on a market that craved fantasies based on pre-existing characters they were already obsessed with. Following this logic, the award should have gone to Stephanie Meyer, as it was her effort that made this knockoff bullshit possible to begin with and created virtually the entire market responsible for James's initial success. James didn't so much capitalize on the situation as she got lucky that someone realized women would pay good money for themed pornography no matter how unsexy or badly written.

Gerd Duerner from Germany is reading Rebecca of Sunnybrook Farm December 9, 2012 - 7:43am

...it is usually given to people like Jeff Bezos, founder of Amazon.

This is an industry prize, it's all about sales numbers; not writing, not books, not love for language, nor for humanitarian effort - nothing with any merit whatsoever beyond to turn a nice dime.

Dwayne from Cincinnati, Ohio (suburbs) is reading books that rotate to often to keep this updated January 8, 2013 - 7:47am

I was thinking about this after the Unprintable podcast, and good for her. I don't think I'd ever get into what she has published so far, but if people are having fun reading that stuff and she wants to write it isn't really hurting us as writers is it? How many other authors will get a chance to put out there 'serious literary novel' because of the money Random House took in from this?