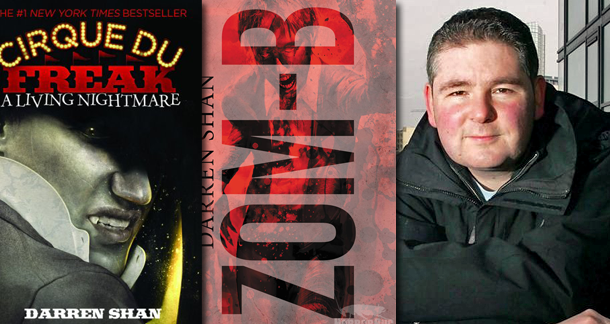 Do you ever think things are a little off-kilter? Like you’ve stepped partially through the looking glass and found a place that’s almost like reality, but something’s not quite right? I got that feeling reading an interview with YA author Darren Shan this weekend about his experiences with publishing his novels.

Shan writes horror aimed at teenagers, if you haven’t read any of his books, most notably the Cirque du Freak and Zom-B series, which contain a lot of gory violence. Apparently that’s fine, but putting in a kiss is a no-no. What? Really?

"You can have heads ripped open and sacrifice," he said. "The only time you get in trouble with the publishers is if there's kissing." He said there was a perception that teenage boys in particular would prefer to read chaste, sexless works: "Sex is a no-go. Apparently boys don't want to read about sex. It's ridiculous."

I’m pretty sure most of the males in the audience would disagree. Shan started writing horror for teens because there wasn’t anything out there like it at the time. Shan says he cut his teeth on Stephen King, which, let’s face it, isn’t exactly what teens should be reading (or should they?). It wasn’t just the reactions he got from publishers about including sex, it was their attitude to teenage male readers that surprised him the most.

"I'll never forget a meeting with one publisher where they said we don't publish books for teenage boys; teenage boys don't read," he said. "Well, publish books they want to read and they will. It's not that they get to a certain age and go, 'I'm not reading any more'."

And teenagers (and older readers) lap up his books. I like the fact he feels a responsibility to not just show violence with no morality involved, but it has to be justified in a story’s context. “You can't be morally ambiguous in the way you can in adult books." I think he’s right about both topics, but I suspect publishers are covering their own asses to avoid confrontations with angry parents. Does sex and violence have a place in YA fiction? Obviously there’s an audience, but won’t it make them all into serial killers?

You can read the complete interview with Darren Shan here.