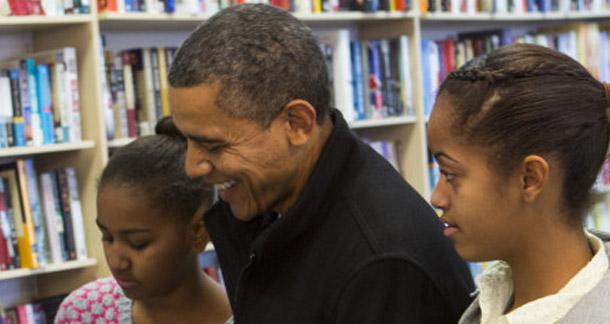 I would wager that, as President of the United States, Barack Obama is a little pushed for time when it comes to Christmas shopping. However, that didn’t stop the commander-in-chief and his two daughters, Sasha and Malia, from taking a trip to an independent bookstore in Arlington, Virginia, on Small Business Saturday, according to The Associated Press.

Obama and his daughters stopped by One More Page Books to grab some gifts for the holidays. A statement from the White House said that the president and his daughters bought 15 books, but did not disclose which ones.

One More Page’s official website says that the proprietors didn’t know the president was on his way until around 10 minutes before he and his daughters arrived, and that Obama posed for pictures with other patrons of the store before greeting locals outside.

Both the official White House statement and that of One More Page suggest all 15 of the books the Obamas purchased were for kids, so we’ll just have to speculate as to which titles the president would have bought for himself and the First Lady in the comments section.

Did you support a local bookstore on Small Business Saturday? What titles are topping your Christmas wish lists? Personally, I’m hoping for a copy of Walden and In Search of Lost Time. I’m just saying...

Very happy that the small business which the Obamas supported was an independent bookstore...

Well, One More Page's owner didn't build their business anyway. So what?

Well, One More Page's owner didn't build their business anyway. So what?

I fail to see how the president buying books for his children at an independent bookstore is anything other than a positive thing.