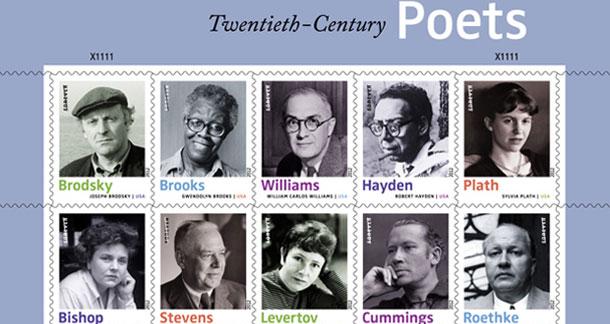 You know who's got it worse than publishers these days? Postal employees. Not only are they dealing with competition from, you know, email, but they're also wrangling with the atrocious inefficiencies that come along with being run by the U.S. government. So literary nerds and booklovers should be sympathetic to their plight...and do their civic duty by purchasing some of these adorable "Forever" stamps emblazoned with the faces of famous poets. Awwww.

Of course, the Forever stamp is actually kind of worse for the USPS, because the price doesn't change, and thus, they don't make a lot of money on them. But until the postal folks figure out something that could actually drive revenue (like sponsored stamps that are basically paid advertising. Or possibly losing fewer packages and making the lines in their brick-and-mortar locations less agonizing), making Forever stamps with cute stuff that people like on it will just have to do. Like poets. Who doesn't want to send Gwendolyn Brooks across the country on their much-overdo thank-you cards?

And hey, for your convenience, they offer online ordering.

Image via the USPS

It Took Me 10 Years to Publish My Poetry Collection

Cool stamps. I'll definitely be picking some up.

Incidentally, it looks like there could be more to the plight of USPS than atrocious ineffiencies -

"But politics also plays a huge part in this. In 2006, in what looks like an attempt to bust the Postal Workers' Union, George Bush signed into law the Postal Accountability and Enhancement Act of 2006. This law required the Postal Service to pre-fund 100 percent of its entire future obligations for 75 years of health benefits to its employees – and not only do it, but do it within ten years. No other organization, public or private, has to pre-fund 100 percent of its future health benefits."

Exceptional article…. Was desperately looking for an article like this……looking ahead for more Generic Cialis