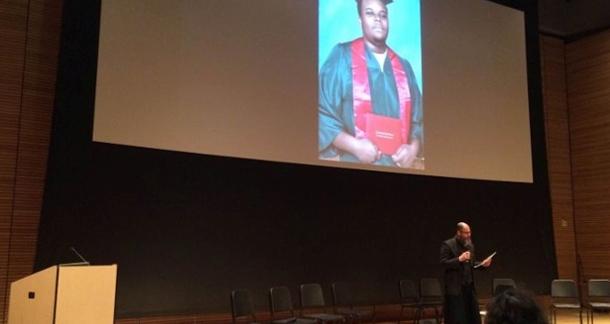 Image by Paul Soulellis via The Guardian

After U.S. poet Kenneth Goldsmith performed “The Body of Michael Brown”—a recitation of Michael Brown’s autopsy report in poetic form—to an audience at Brown University on March 13th, his actions were met with much criticism on social media, reports The Guardian.

In case anyone hasn’t been following the story in the news, Michael Brown was an unarmed black man shot by a white policeman this past summer in Ferguson, Missouri. The event has sparked protests and discussions across the nation.

Goldsmith is mostly recognized for “uncreative writing,” as he terms it. This type of poetry includes transcriptions of quotes from radio and television segments covering national tragedies, as found in his book Seven American Deaths and Disasters. Artist Faith Holland said Goldsmith announced “The Body of Michael Brown” related to quantified self, but gave little else for listeners to use as feedback for interpretation.

Later Holland tweeted: “Just saw Kenneth Goldsmith read Michael Brown’s autopsy report for 30 minutes and no one knew wtf to do with that.”

Goldsmith responded to the uproar by retweeting his audience’s upsetting remarks, such as, “Kenneth Goldsmith: art is not white appropriation of Black suffering. I condemn your cruel reading of Michael Brown’s autopsy report.” The poet has since announced that he received a death threat. After the fact, he gave an official explanation of his actions on Facebook.

The Guardian also reports that Goldsmith has decided to donate his speaker’s fee from the event to the family of Michael Brown, saying, “There’s been too much pain for many people around this and I do not with to cause any more.”

What do you think about Goldsmith’s version of poetry? Is it fair expression, or a disastrous misstep?

Joshua Chaplinsky from New York is reading a lot more during the quarantine March 18, 2015 - 7:14am

Just did a Google image search on Kenneth Goldsmith. He does not seem like an obnoxious guy who does things for attention. Not in the least.

I think it is somewhat difficult to say whether it is fair expression or a disastrous misstep without hearing it.

The first thing I did was try and find his poem, but he has requested that the recording not be made public as  "There’s been too much pain for many people around this" (from his facebook profile).  On facebook, this has been his last say on the matter.

So what was Kenneth Goldsmith setting out to achieve?

According to a facebook statement he took an American tragedy and "simply read it without commentary or additional editorializing."  To Goldsmith, his uncreative writing "...is able to tell the truth in the strongest and clearest way possible."

An autopsy report is a cold, clinical statement of fact regarding death.

However, he  says "I altered the text for poetic effect; I translated into plain English many obscure medical terms that would have stopped the flow of the text; I narrativized it in ways that made the text less didactic and more literary."

He  states "I simply read it without commentary or additional editorializing" but also says  "I always massage dry texts to transform them into literature, for that it what they are when I read them."

To me, his aims are contradictory.  He is trying to marry the scientific truth of the autopsy report, with the emotional truth of literature.

What he has got, has been an emotional response that encompasses all the aspects of Michael Brown's death that an autopsy report does not address- race, police oppression, class, history, etc.

And it has been painful to the people this most affects.