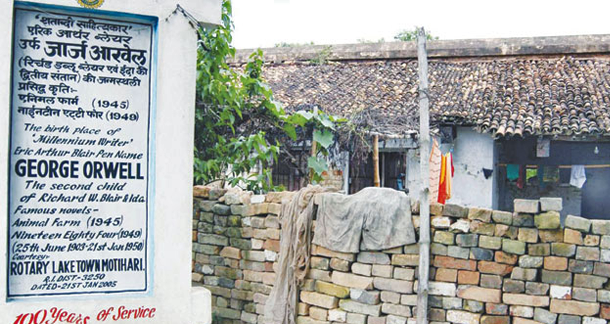 George Orwell was born Eric Arthur Blair on June 25, 1903, in a remote part of northern India called Bihar. A decade and a half later, Mahatma Gandhi, the hero  of Indian independence, started his movement in the same part of India. And just last week, a foundation stone for a memorial park to Gandhi was laid — on land adjacent to Orwell’s birthplace.

This story seems to get stranger and stranger the more I look into it: the land was apparently protected as a memorial to Orwell and had nothing to do with Gandhi on a historical basis. Bihar state government announced the memorial, laid the cornerstone at the site in Mothari, and now work has apparently since stopped. According to Deo Priye Mukherjee, head of an Orwell society in Bihar, “The place has no link with Gandhi. This is a land grab attempt.”

Orwell only lived in Mothari for about a year before returning to England with his mother and sister — and he never went back there. The house was damaged in 1934 in an earthquake that struck the region and has been unoccupied (other than by stray animals) and basically left to decay since that time. A statue to Orwell in front of it was vandalized recently, too.

Orwell wrote an essay, “Reflections on Gandhi,” in 1949 where he praised Gandhi’s work, but criticized his “Spartan lifestyle.”

"No doubt alcohol, tobacco and so forth are things that a saint must avoid, but sainthood is also a thing that human beings must avoid,” Orwell wrote.

So an odd memorial park to Gandhi or a birthplace left to decay — neither option seems particularly attractive to me. Now, if they were to open an Orwell theme park… Don’t you think that would be a good idea?