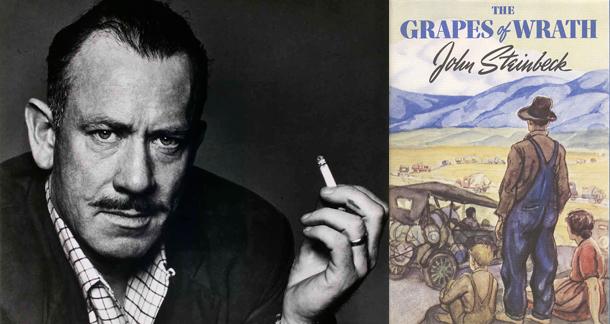 The Grapes Of Wrath, John Steinbeck's Pulitzer Prize-winning novel, will celebrate its 75th anniversary next year. In honor of this milestone, Steinbeck's current publisher, Penguin, in conjunction with the National Steinbeck Center, has planned a cross-country tour to both promote the novel's (and Steinbeck's) legacy, and create new artwork from the experience. More from Publisher's Weekly:

[The Grapes Of Wrath] traces the Depression-era journey of the Joad family from Oklahoma to California. So, from October 4-14, the Steinbeck Center will, working with a collection of artists, retrace that trip along Route 66, wending through Texas, into New Mexico and Arizona, before arriving in California. On the trip, the artists will collect oral histories from people they meet, and those stories will appear in an exhibition at the Steinbeck Center in Salinas, Calif., May 2-4.

The Penguin Book Truck, and the Penguin Pushcart, will be traveling on the Steinbeck Center trip, stopping at selected locations to sell books by the novelist.

The aforementioned exhibition at the Steinbeck center coincide's with their annual Steinbeck Festival, which you can learn more about here.

Who's on the path of this tour? Will you check it out?