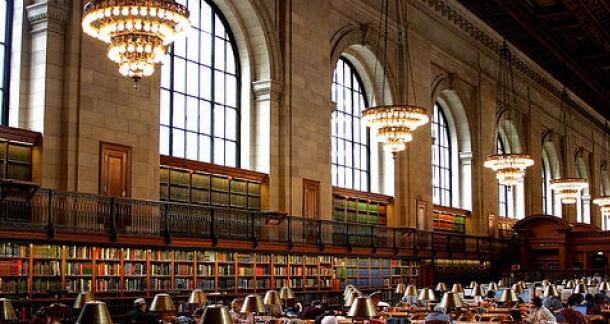 Via the Wall Street Journal:

Penguin Group, the largest of the “Big Six” publishers, has announced plans to roll out a pilot program for digital lending to the New York Public Library and the Brooklyn Public Library, two of the largest library systems in the United States. Under the new system, the libraries will be able to lend eBook versions of Penguin titles six months after they are released in stores, and each digital copy will expire after one year.

Vice president of online sales and marketing Tim McCall said that Penguin will make all of its titles—around 15,000 eBooks—available for purchase by the library systems, and added that the digital books would be priced in the same manner as retail copies. The six-month waiting period is intended to prevent eBook lending from undercutting sales, while the one-year expiration date is designed to mimic the shelf life of printed books. Penguin halted sales of digital books to libraries last fall because of concerns over server security and the privacy of libraries. The decision was not made because of an adverse effect on revenue generated by digital lending, according to Mr. McCall.

Christopher Platt, director of collections and circulation at the New York Public library, sees the deal as nothing but good news, but hopes the publisher might eventually release digital titles immediately, arguing that exposure for new authors in libraries might boost sales in bookstores and online. President of the Brooklyn Public Library Linda Johnson also celebrated the compromise, saying:

Publishers haven’t been doing business with libraries this year, so this is a great moment for us. We’re thrilled that Penguin has come back to the table.

Digital distribution via libraries is scarce amongst the “Big Six” publishers, with three (Hatchette, MacMillan, and Simon and Schuster) refusing to make digital copies available at all. The remaining two, Random House and HarperCollins, hike prices and limit circulation, making acquisition by libraries impractical, according to officials.

eBook distributor 3M is the company providing the platform for delivering Penguin titles to the libraries, and signed separate deals with both library systems and the publisher on Monday. 3M global business manager Matt Tempelis said his company was optimistic that successful implementation of the deal could prompt other major publishers to soften their stances on eBook lending in the future.