Penguin Opts Out of Lending Library 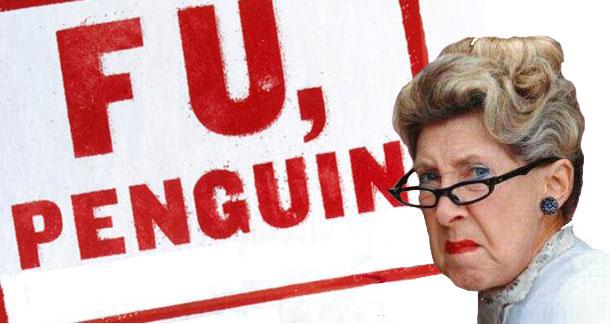 Oy vey, Penguin! What the hell are you guys doing?

First you start up that ridiculous self-publishing program (you can read about it HERE) and now you're backpeddling out of libraries?

Here are the deets: In snap decision fashion, Penguin USA has decided they'll be pulling their new titles from library e-book vendors (if you're not familiar, Overdrive would be one of them).  Here's what one of the Penguin spokesmen had to say regarding the matter:

Due to new concerns about the security of our digital editions, we find it necessary to delay the availability of our new titles in the digital format while we resolve these concerns with our business partners.

While we are pleased that Penguin chooses to sell e-books to libraries (unlike some other publishers), we are disappointed in their decision to delay sales of new titles to libraries. Penguin says that they have security concerns with library sales which we find puzzling. There is no evidence that security breaches have been tied to public libraries or library users. One would think this is more of an issue with everyday consumers or hackers who do not want to pay for e-books.

So we've got Penguin saying there are security issues and the Director of Public Access saying she didn't get that memo.  Someone's pulling a leg.  Regardless, this latest move means that four of the "Big 6" no longer participate in library lending, and as you might have guessed, speculation mostly points to publishers worrying about their bottom line. Yeah, money.

So cheers to Random House and HarperCollins for playing nice. They're the remaining two of the "Big 6" that have not opted out of the library lending program.

Instag8r from Residing in Parker, CO but originally from WV is reading Blood Meridian by Cormac McCarthy November 22, 2011 - 11:24am

And why shouldn't it? This is a business not a charity. Businesses are in business to make money. They are not in business to hand out freebies to the "give me" crowd. Where the fuck did this entitlement attitude come from?

You're in the book business, but you shy away from libraries - THE book institution? I call shenanigans.

Make your money, but don't be an asshat.