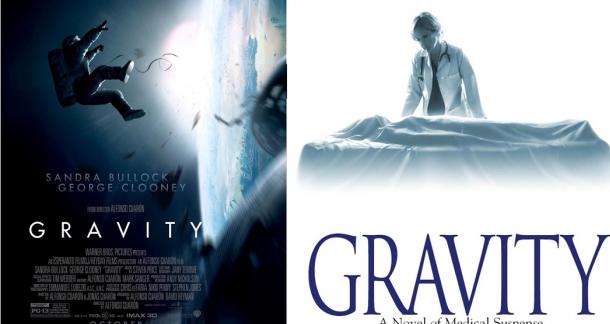 Author Tess Gerritsen is suing Warner Bros. for failing to acknowledge her book as the inspiration for the motion picture Gravity, and for failing to pay her contractually-agreed-upon fees.

It gets a little complex, but here's the lowdown:

Gerritsen published the novel Gravity in 1999. Just a couple months later she sold the film rights for $1 million plus a $500,000 bonus to be paid when and if the film was actually made, plus 2.5% "defined net proceeds." She made the deal with a subsidiary of New Line Cinema, which was purchased by Warner Bros. in 2002.

Gerritsen's suit claims that Alfonso Cuaron, who would go on to direct the motion picture Gravity, was attached to direct the adaptation of her book early on.

The complication is that Gerritsen isn't suing for copyright violation. She's suing for what she believes she's owed based on her original contract.

So the big question is whether the movie was an adaptation or not.

Here's a description of the book from Amazon.com:

Dr. Emma Watson has been training for the adventure of a lifetime: to study living beings in space. But her mission aboard the International Space Station turns into a nightmare beyond imagining when a culture of single-celled organisms begins to regenerate out of control — and infects the space station crew with agonizing and deadly results. Emma struggles to contain the outbreak while back on Earth her estranged husband, Jack McCallum, works frantically with NASA to bring her home. But there will be no rescue. The contagion now threatens Earth's population, and the astronauts are stranded in orbit, quarantined aboard the station — where they are dying one by one...

Here's the description for the motion picture from Amazon.com:

Gerritsen claims that she wrote additional material for the motion picture after the book's publication which included some destructive sequences and the idea of a lone female astronaut adrift in space.

What do you think? Does she have a case?

It sounds like she has a case. The hard part will be proving it. Sadly, by time the matter is resolve, one way or the other, it will be so far in the future Gravity, book and movie, will probably have been forgotten.

I wish Ms.Gerrittsen the best of luck,

Gerd Duerner from Germany is reading Rebecca of Sunnybrook Farm May 2, 2014 - 7:00am

And she'll be hard pressed to prove that "Gravity" the movie is in any way related to "Gravity" the book beyond mere title and setting.

But frankly, I couldn't care less how it goes out; as I see it New Line paid $1Millon for a title (foolish) and now the recipient wants to quarrel over if using it justifies a payment of a further half million (greedy)...

Yah got the money babe, come on. A million isn't enough?

I think not. Titles aren't copyrighted. People stranded in space is far from an original idea. A woman doctor? Also commonplace; most med students are women these days. The unique quality of Gerritsen's book seems to be the contagious organism; the movie has no hint of that.