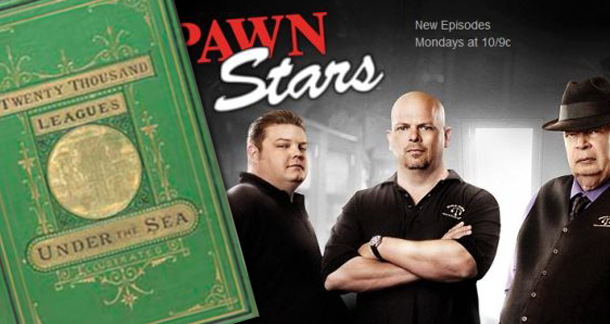 Reality shows, eh? I don’t watch them, having enough reality of my own, but occasionally something does pop up that is of interest. One such event occurred on the History Channel’s highly rated show Pawn Stars recently, when a book turned up for sale — a rare U.S. first edition of Jules Verne’s Twenty Thousand Leagues Under The Sea.

If you’re not familiar with the show, it follows the exploits of the Gold & Silver Pawn Shop run by the Harrison family outside Las Vegas. I love the description on Wikipedia, that it’s “a version of Antiques Roadshow 'hijacked by American Chopper's' Teutul family”.

Anyway, a customer, Gary, brought in a rare book which was the aforementioned first U.S. edition of Twenty Thousand Leagues. The book is rare because most of the copies were destroyed in the Great Boston Fire of 1872, leaving only 50 or 60 in existence.

So the guys at this pawn shop know nothing about books, but they do know when to get advice.

"This book is very, very rare,” book expert Rebecca Romney told him. “It’s not the end of the world to see Verne with condition issues, because Verne is one of those people who was always heavily read. With all of that in mind, I would place this at about $12,000.”

Gary negotiated with Corey Harrison and ended up walking away with $9,500. A quick trawl of the internet showed other copies available for more like $10-10,500, so I guess he did all right. One turned up on the Antiques Roadshow in 2009, valued at $12-15,000. But why did he take it to a pawn shop? It’s beyond me, particularly after he’d had it restored — I guess he wanted his 15 seconds of fame.

You can watch the video here.

I'm sure he didn't take a book that valuable and rare to a pawn shop for fame. He probably needed the cash in a bad way and took it to a place he knew routinely bought high priced items.

I'm always wondering that question myself when I watch Pawn Stars (okay, okay, yes, I sometimes watch Pawn Stars--also: Storage Wars and Deadliest Warrior): why would you take such a thing to a pawn shop? However, these guys run a fairly high-end pawn shop. Not sure I'd even call it such, though I guess they do offer the pawn option, where you use your 'whatever-the-thing-is' for collateral against a loan. Also, there is the Oooo, me and my 'whatever-the-thing-is' is on TV!

I happen to know Gary personally and belief me he didn't need the money. He has a net worth of around $2M.  If you take into consideration what it would cost to sell this book at an antiquarium book auction, he came out good, and had fun doing it. He did his due diligence and new exactly what the appraised value would be.