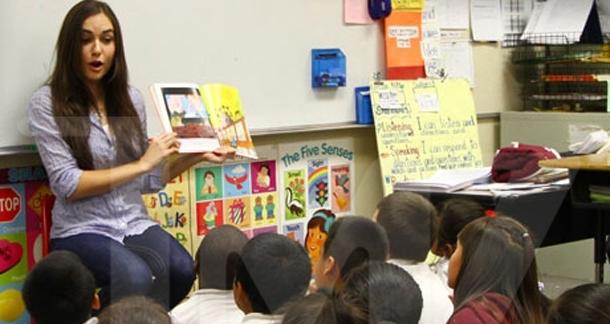 Too bad for them TMZ has pictures indicating otherwise.

Read Across America is sponsored by the National Education Association, and works toward the admirable goal of getting kids to read more. While their official celebration day is March 2, they sponsor and encourage literary programs throughout the year. Grey was a guest reader at Emerson Elementary School in Compton, CA, earlier this month.

I'm not a parent, and maybe if I was I would feel differently, but I question all the sturm und drang. Really, I'm just curious to know whose bright idea it was to ask Grey in the first place. If she's passionate about promoting literacy, that's great, and I'm not saying she shouldn't be allowed to do it. But did they really think this wasn't going to ignite a shitstorm?

Joshua Chaplinsky from New York is reading a lot more during the quarantine November 11, 2011 - 1:46pm

So many things to say.

Man does she look haggard, but she was never that hot to begin with. What I know of her is that she is a pretentious twit, though it appears she is smart enough to realize she is on the down hill slope and looking for some publicity to keep her name out there.

This is taking place in Compton? I think the parents are probably just jealous that Sasha Grey CAN read.

None of those kids would be here if their parents hadn't fucked. I mean, shouldn't they be THANKING Grey for being an inspiration? Maybe one of those adorable little anklebiters was conceived BECAUSE of Sasha Grey.

Joshua Chaplinsky from New York is reading a lot more during the quarantine November 11, 2011 - 2:09pm

@Waterhouse - I think she looks pretty good. It's just that SOMEBODY stole a low-res, watermarked TMZ image.

Class Director
Rob from New York City is reading at a fast enough pace it would be cumbersome to update this November 11, 2011 - 2:22pm

Hey man, it's watermarked, so it's not stealing.

And also she is incredibly hot and anyone who doesn't agree is wrong and I would marry her if she asked.

Yeah, I guess it's a bad thing to have a woman reading to kids who spent her early career giving orgasms out either on film or at keyboards.  Making people happy and sedated is a bad thing, I guess.

But having Jessica Alba read to kids, that's better.  Ya know, the actress that played a stripper in Sin City.  Or maybe Uma Thurman, who played the Bride in the ultra-violent Kill Bill movies.

Don't get me wrong, I dig both these actresses.  And Kill Bill ranks #3 on my all time best list.  But if you can't figure out my point or sarcasm, feel free to read the next post.

justkristin from the basement is reading whatever is within reach November 11, 2011 - 3:15pm

- should be allowed to pick what they want to read ("They *want* to read! Why would you want to ruin it by insisting on only non-fiction, or forbidding them the joys of Junie B. Jones and Captain Underpants because you find themto be too negative an influence, or disallowing comics, graphic novels or humor because they will not learn anything?")

- can possibly read more than one book at a time ("Do you only watch one TV series at a time until it ends and only then start a new one? Is your mental capacity so limited that you can't handle more than one story-line at a time? If it is, but your kid seems to be better endowed, why would you want him to become less able?")

- have any business at all in the adult (age, not euphemistic genre) section of the store ("Are you worried about their ending up over their heads in the information pool? Or simply concerned that, should they explore something you don't understand, you won't have any answers for them? Wouldn't you love to take on that exploration together?")

Nothing makes me madder than parents who don't understand their children's curiosity, and/or who want to control it, and/or who are bothered by the method of its delivery. Idiots.

Wow, ya that's a pretty stupid move. I guess it could make sense if she had children attending that school, but otherwise it's just weird. That said, she is a pornographer not a pedophile, people need to chill.

Also, in regards to her being a 'legitimate' actress: In Entourage she played herself. Check out The Girlfriend Experience on IMDB - she plays a whore. I haven't seen it, but I did notice it in the video store - it has one of those 'Must be 18 to rent' stickers, meaning it goes beyond the limits of an R rating.

I seriously doubt she did this because she wanted to promote literacy. Her indignant response just highlights how stupid she is, acting as if reading to these kids has some positive effect. All she did was create an awkward situation for these kids' parents and teachers. There are a million charities out there but she deliberately chose the one that would create controversy for herself. It's self-promotion, not charity.

Joshua Chaplinsky from New York is reading a lot more during the quarantine November 11, 2011 - 10:01pm

in the video store - it has one of those 'Must be 18 to rent' stickers, meaning it goes beyond the limits of an R rating.

I think the biggest problem here is that the school even let her read in the first place. Not because it is wrong, but the result here is entirely predictable.

That said, the predictable response from the parents is stupid, if natural. She's a girl, who maybe made mistakes, maybe regrets them or not, and she's moved on to want to do something more. If that means playing fictionalized versions of herself in movies and appropriately reading books to children, then I think that's great. She's still very young, but she's smart and mature.

If anything, I think Grey should be speaking to high schools.

Haha. This is awesome. I say Kudos to Sasha Grey. She seems like a really cool chick. I think anyone who has a problem with this is, at heart, an awful jackass. That's just my opinion.

Class Director
Rob from New York City is reading at a fast enough pace it would be cumbersome to update this November 12, 2011 - 10:45am

Might she look back and wish she had done things a little differently, maybe. But I know plenty of people who work in offices and feel like that. To assume she's some misguided little girl who made the mistake of letting a bunch of guys fuck her on camera is a little 'holier than thou'.

So if I understand it, they have a problem with her sucking dick, and then they take issue with her using her time to read books to children instead. You just can't win with some people.

Nathan from Louisiana (South of New Orleans) is reading Re-reading The Rust Maidens by Gwendolyn Kiste, The Bone Weaver's Orchard by Sarah Read November 13, 2011 - 9:42am

That's just some more I saw on it when I woke up and sat down with my coffee this morning. It's a basic report of what we already know, but the comments section is on fire with some great and funny stuff.

Check out the time of the report, too -It's good to see LitReactor beating these guys to the punch (and by a whole day at that!)

The Moms are just mad because their husbands all probably knew who the woman was from their um research in their offices at home.

I think more problems lay within the parents than anything.  None of the children from first to third grade have any such knowledge of her background, profession, or anything that could even be slightly harmful to these children.

The guilt here lays within the parents.  If they had nothing to be ashamed of themselves, they would not be linking adult material to their children at all.  I agree by the time your children are 8 and 9 years old, they *may* be exposed to adult entertainment via cable TV, satellite or the Internet.  However, if this is true, it is solely *your* responsibility to censor this media.  All relatively modern digital TV receivers, satellite receivers and computers with XP or higher have filters.

If you don't know, it's up to you to educate yourself.  Call your local cable or satellite technical support for real-time instructions on how to set up those parental features.  Call Microsoft if you own a retail version of Windows  - or computer technical support for OEM - if you have no idea how to set up restricted accounts and filter adult material, violence, drugs, etc.

This just isn't the fault of 1) the actress or 2) the school or 3) the program.  She's doing a very good thing with her time to help your children.   How many parents actually read to their children and help teach them how to read?

Open your mind and educate yourself as well as your children.  Do not blame the once-adult actress for taking an interest in your childrens' future.