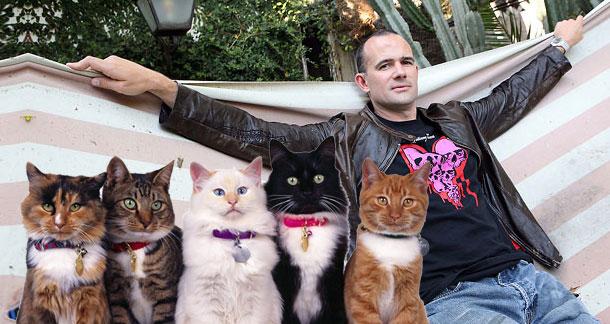 Via: The New York Times

Danielewski (House of Leaves, Only Revolutions) plans to release his 27-volume novel, The Familiar, through Pantheon Books in 2014. Not the entire thing, mind you. The novel will be released one volume at a time every three months, making this close to a seven-year endeavor.  Edward Kastenmeier, Danielewski's editor, said that this would be an attempt to create a "serial relationship" with the audience.

Pantheon obviously believes in the project.  They threw out a cool million to Mark Z. for the first ten volumes alone. No word yet on the payout for the remaining seventeen.  There's also very little known regarding what The Familiar will be about.  Danielewski said, "The story concerns a 12 year old girl who finds a kitten," and that he was influenced by Lord of the Rings, Moby Dick, and Lone Wolf and Cub.

As if this news wasn't exciting enough, it's also been announced that Mark's novella, The Fifty Year Sword, will finally get a US release next October.

What do you think, guys?  Do cats excite you?

Joshua Chaplinsky from New York is reading a lot more during the quarantine November 21, 2011 - 10:46am

As far as I'm concerned, this whole endeavor sounds awesome, as long as it's not written in verse.

Kasey from the morally and physically challenging plains of Texas is reading 12pt. Courier font November 21, 2011 - 11:07am

$1 million for the first ten books! Good for you MZD.  I just wonder what the style and format will be - will he be sticking to his ergodic roots, or will he go another direction?

I find Danielewski's shenanigans somewhat hokey in nature but forward-thinking and pushing trends that should be pushed, so good on him. I wonder how long the individual volumes will be and how much they will cost.

I'm not even a quarter of the way through HoL, but so totally ready for this.