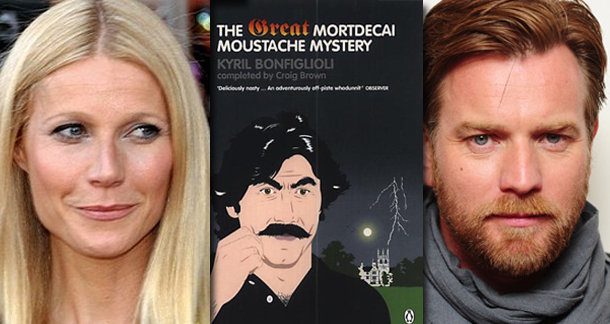 On the back of the disappointing figures for Johnny Depp’s latest blockbuster, The Lone Ranger, it’s just been announced that Ewan McGregor and Gwyneth Paltrow will be joining him in his new project called Mortdecai, based on the comic thriller books by Kyril Bonfiglioli.

No word has been forthcoming on Paltrow and McGregor's likely roles, but the film – apparently based on the final Mortdecai novel, The Great Mortdecai Moustache Mystery, which was completed by satirist Craig Brown – will be directed by David Koepp (Premium Rush). Described as "an amoral Bertie Wooster with psychopathic tendencies", Charlie Mortdecai is an unscrupulous art dealer on the track of Nazi treasure.

P.G. Wodehouse appears to be a good reference point, if not a model for Bonfiglioli’s writing, with manservant Jock Strapp accompanying Mortdecai on his adventures in bearing a “fun-house mirror relation to Wodehouse's Wooster and Jeeves. Not happy with that, Bonfiglioli even gets Mortdecai to make reference to Wodehouse in his books.

Depp was announced earlier this month on the back of the bad news about Lone Ranger, but is currently working on an adaptation of the Sondheim musical Into the Woods.

Another big-name movie destined for glory? We’ll have to see. Let’s just hope it doesn't end up like The Lone Ranger.

I'm not familiar with this book. Ewan McGregor is a pretty damn good actor though, and I like Paltrow as well. I wonder if Johnny Depp isn't as big of a draw anymore, or if it is simply the Western that isn't a big draw anymore. I'll admit I'd go see just about anything he does, though I've not cared for some of his more recent projects with Tim Burton.