Oyster: The Netflix For eBooks? 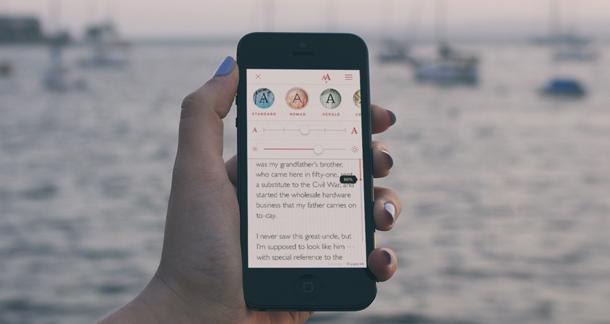 Oyster, an app launched last week by a team of self-described bookworms in New York City, offers subscribers access to over 100,000 eBooks via iPhone or iPod Touch (they'll be rolling out iPad availability later this fall, according to The Huffington Post). The service costs $9.95 monthly, and right now offers titles from HarperCollins and a host of smaller publishers, and partnerships with some of the other Big 5 could happen soon. Here's more from The Huffington Post:

The app also incorporates discoverability features, similar to Goodreads [sic]. Users can see what their friends are reading and recommending, and also display their own libraries.

Where did this seemingly random (albeit precious) name come from? Shakespeare, of course! It's a reference to a line in "The Merry Wives of Windsor:" "the world's mine oyster." According to the app's site, founders Eric Strombers, Andrew Brown and Willem Van Lancker picked this reference because, "All the pleasures of reading are yours for the taking, no matter where you go."

Many have already drawn the comparison of Oyster to Netflix, and I certainly see the resemblance. The ultimate question is, will it catch on? As the HuffPo article points out, Amazon Prime members can utilize the Kindle Owner's Lending Library, which offers more than 350,000 eBooks—but of course the catch there is, you have to own a Kindle (the service isn't available to users of the iPad/iPhone app); moreover, you can only borrow one book a month, versus the unlimited access Oyster offers.

Yes, Oyster is $40 more expensive than Prime per year ($120 versus $80, respectively), but for Apple users, the price may be well worth it. Then again, many city library systems are offering an ever-growing selection of eBooks that you can check out ad nauseam, completely free of charge. Some of those loanable titles even come directly from Amazon. I suppose Oyster's success, then, will depend on its selection and its convenience.

Interested in using this app? Right now they're invite-only, but you can request an invitation. Give it a try, and/or tell us what you think in the comments section.

I saw a job post online several months ago for an opening at this company, and it got me wondering what exactly their game plan was. My guess is that for something like this to really catch on and compete with Prime, they'll definitely have to score some hefty contracts. That is, after all, an issue that Netflix itself has had in the past; users aren't going to renew a service that doesn't have the titles they actually want to read (or watch, in the case of Netflix). It should be interesting to see how things go.

Not to mention, I don't read fast enough and amazon prime, for 80 dollars, gives me free movies and tv (fx shows included) and free shipping on almost all REAL books, and clothing and everything else amazon offers.  It's hard to justify 120 in comparison to that, it really is.

Joshua Chaplinsky from New York is reading a lot more during the quarantine September 10, 2013 - 9:10am

This reminds me that I need to check and see if my local library lends eBooks.