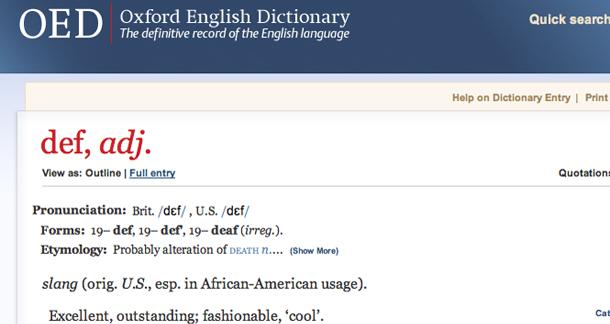 The editors of the Oxford English Dictionary are seeking help from their users in their search for the origins of the word 'def,' currently defined by the OED as "excellent, outstanding; fashionable, 'cool'." This isn't a push to alter the meaning of the word, but rather to discover its rise to prominence in hip-hop culture, and learn whether or not 'def' was used prior to 1979, when the Sugarhill Gang may or may not have used it in their song "Rapper's Delight." You can read the entire OED appeals post here.

Now, I'm all for etymology. I find it fascinating. That's why I think perhaps OED is a bit misguided in their current interpretation of 'def.' Here's how they explain the word's origins:

…it seems likely that def originated among rap musicians as a variant of death in expressions like to be death on in the sense ‘to be extremely good at’.

Yeah, maybe. Perhaps I'm misguided, but I always thought 'def' was an abbreviation/derivative of 'definitely,' as in 'most definitely,' as in the rapper 'Mos Def.' So if someone says, "I'm so def," they're merely saying they can do anything they want, because they're good at everything—not necessarily 'fashionable,' or 'cool,' though it has been used in that context too. But hey, I'm no authority.

How do you understand 'def'? You can weigh in with your thoughts on the OED appeals board, or right here in the comments below.

I'm with you, but my knowledge of rapper slang is low.  I had no idea what Bees in the Trap meant but am now educated thanks to the wonder Nicki Minaj.