Own The Check That Bought Superman For A Pittance 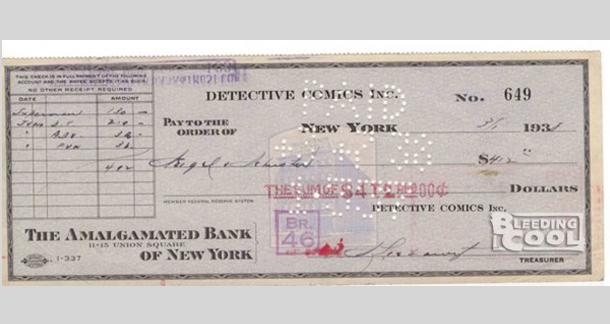 In 1938, Jerry Siegel and Joe Shuster created a comic book character which they sold to Detective Comics for the paltry sum of $130.

That character? Superman. For $130. Which, according to a random inflation calculator I found on the internet, is equivalent to roughly $1,990 today. Detective Comics would go on to become DC Comics, and Superman would end up turning into a multi-billion dollar empire and a cornerstone of pop culture.

And now you can own the actual check from the deal--probably the most lopsided transaction since the Native Americans sold Manhattan for some beads! Comic Connect says they'll be bringing it to the auction block sometime next year.

The check is written out to $412, to cover the cost of work Siegel and Shuster did for other comic imprints. Superman is itemized on the side. It is also interesting to note, both the creators' names were mispelled on the front, so they both had to endorse the check twice on the back.

This is an oft-cited piece of comic book history, and a prime example of creators losing out on metric tons of money because they didn't realize how much their properties would be worth.

Now granted, Siegel and Shuster didn't wipe their hands after the deal and never see another penny. The meteoric rise of Superman (which was, dare I say, faster than a speeding bullet) sparked years of copyright issues and bad blood between everyone involved.

Admin
Mark from Lexington, Kentucky is reading The Chronology of Water October 26, 2011 - 12:59pm

That's a cool story, Rob.  Thanks for reeling it in.

The real irony will probably emerge on the auction day.  Some recognizable Hollywood director or A-list actor will probably want this wall ornament badly enough to drive the winning bid toward the kind of figure Superman's creators should have received in the first place.

Class Director
Rob from New York City is reading at a fast enough pace it would be cumbersome to update this October 26, 2011 - 1:16pm

Thanks. And, right? The check will be worth more than the character. Crazytown, U.S.A.