Outlier Digital to Compete with Kindle Worlds... with Twilight? 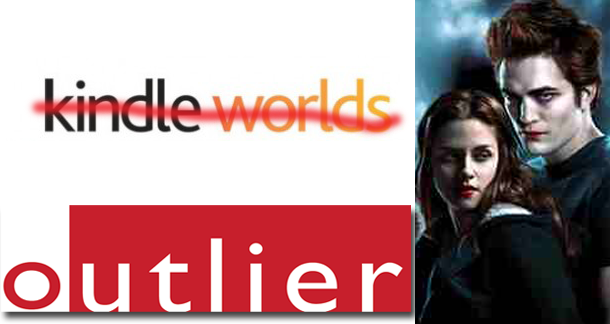 Their press release says Outlier Digital will allow authors to sell their fan fic for licensed work — wait, that sounds like Kindle Worlds — and claims they’re in discussion with franchises and “well-known authors”.

"The problem with the recently released Kindle Worlds’ platform, is it traps writers within the confines of Amazon’s as yet unestablished fan-fiction community instead of the extensive network already at their fingertips,” said Mark Morgan, one of the company partners, in the statement. “Their idea is close, but it actually prevents fan-fiction writers from posting their stories anywhere else, halting their existing fan-base outreach on other free portal options. It’s like saying they can write whatever they want as long as they do it for Amazon.”

The press release doesn’t say whether it will include Twilight among its licenses, but it would be an obvious one for them to leverage. It would probably also pull in a certain audience, as well. There’s another partner company called ‘ttwick’ involved in the scheme, but it’s unclear what they’re going to do for the company.

I’m still dubious that this is going to work. The whole point of fan fiction is to do something the author or creators of a series haven’t thought of or to put the characters in positions (heh, heh) that wouldn’t be “normal” in the strictures of whatever the source media is. As a result, it was often free to avoid upsetting copyright holders and avoid legal quagmires. What we’re getting from both of these platforms is licensed material which will be somehow vetted to make sure it doesn’t upset the license holders. Is that still fan fiction? Or just a franchise? I’d say it’s the latter.