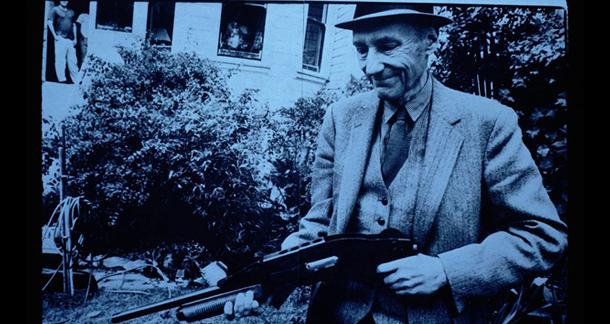 From 1978 to 1983, director Howard Brookner, alongside cameraman Tom DiCillo and sound recordist Jim Jarmusch, set out to make the definitive William S. Burroughs documentary. He extensively interviewed Burroughs' contemporaries Allen Ginsberg, Brion Gysin, Francis Bacon, and Patti Smith, among others. He worked closely with members of the author's family as well as Old Bill Lee himself. The finished product, Burroughs: The Movie, debuted on BBC TV in 1984 to fan and critic approval.

Sadly, Brookner died of AIDS in 1989, and his documentary fell through the cracks. Low-grade, bootlegged VHS copies floated around online, but these too became scarce. After two decades, it was generally assumed the film was lost for good.

That is, until the filmmaker's nephew, Aaron Brookner, a self-described "enthusiastic Burroughsian," discovered a decent print among his uncle's belongings. Now the young Brookner wants to fully restore and re-release Burroughs: The Movie to a wider audience, and he's launched a Kickstarter campaign to help fund the project.

Here's the campaign's trailer, which features some clips from the film:

Donations start at $1 and go up to $5,000, with an end goal of $20,000 to cover restoration and distribution costs. The campaign ends on December 31st, so head on over to the project page to contribute. If all goes to plan, we'll see the movie in digital form by September 2013, with a special edition coinciding with Burroughs' 100th birthday to release the following year.

For more information on the project, there's a fantastic interview with Aaron Brookner up at The Huffington Post, which details Brookner's relationship with his uncle and his efforts to discover the lost work.

Have any Burroughs enthusiasts seen this film? Who plans to donate?

I have seen this. I used to have a vhs copy, and may still have it.