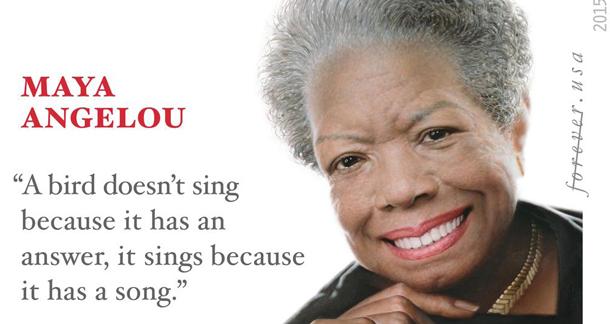 A new stamp featuring a painting of Maya Angelou has been issued by the U.S. Postal Service. Along with the famous author’s image, a quote also appears:

While the words are inspirational, they also appear to be wrongly attributed! A children’s book author, Joan Walsh Anglund, has announced that the quote is in fact hers, reports The Guardian. The line can be found in her book A Cup of Sun, with one difference: the word “he” is used in place of “it.”

Angelou has been publicly attached to the quote multiple times, even by President Obama himself when he awarded Angelou with the 2013 National Medal of Arts and National Humanities Medal. While the U.S. Postal Service tried to shrug the error off at first, eventually they drew the attention of The Washington Post and caved to public pressure.

“Had we known about this issue beforehand, we would have used one of [Angelou’s] many other works … the sentence held great meaning for her and she is publicly identified with its popularity,” announced the government agency.

Meanwhile, Anglund doesn't seem bothered by the quote’s link to Angelou. “I love her and all she’s done, and I also love my own private thinking that also comes to the public because it comes from what I’ve been thinking and how I’ve been feeling,” the children’s author said.

What do you think of the debacle? Is it a simple misquote, or an irreparable mistake?