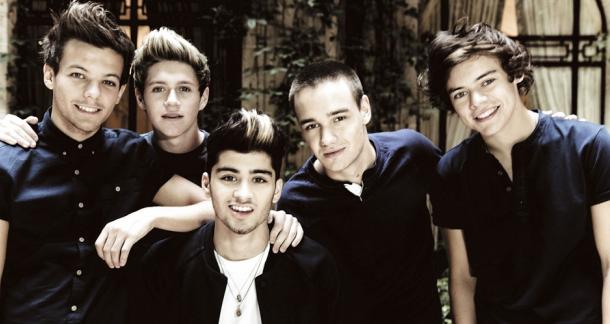 Fifty Shades Of Grey gave us Twilight fanfiction, and now Awake promises to deliver a similar product, this time based on the boy band One Direction.

Yes, that One Direction. And yes, that kind of fanfiction.

Awake scribe Anna Todd, who is a big enough fan of One Direction that she refers to them as "1D", noticed a lot of other fans using Instagram to post short fanfiction stories based on One Direction band members. One of these posters started serializing her story on Wattpad, an online, social writing community frequented by teens and writers of fanfic. Todd decided to writer her own 1D fanfic based on a punk version of squeaky clean band member Harry Styles.

The way black ink of the tattoos is painted across his surprisingly tan skin is somehow appealing. Under his swallows he has a butterfly tattoo on his stomach, it looks much better than a butterfly should on a guy. His arms have many more tattoos than I expected, small seemingly random tattoos are scattered along his shoulders and hips.

Let's get down to business.

Delicate readers or those who would not like their image of Harry Styles sullied should just assume this article ends here. However, if you're feeling brave and foolish, here's a taste of things heated up:

'When you touch yourself? Does it feel like this? Wait.. you've never done that either have you?' his voice is full of surprise and something else.. lust? He goes back to kissing me and his fingers keep moving up and down. 'You're so responsive to me, so wet" he says and I moan. Why are these filthy words so hot when Harry says them? I feel a gentle pinch and it sends a shock through my whole body.

'What? Was.. that" I half ask half moan. He chuckles and doesn't answer but I feel him do it again and my back arches off of the grass. His mouth travels down to my neck, then my chest. His tongue dips down under the cup of my bra and his hand massages the other. I feel a pressure building in my stomach and it is pure bliss. I pinch my eyes closed and bite down on my lip, my back lifts off the grass once again and my legs begin to shake.

This story of on again, off again love between one college girl and her punky Harry found over a million readers on Wattpad before long, and Simon & Schuster has now inked a 6-figure book deal with its 25 year-old scribe. The book has also been optioned for a movie. Excuse me, optioned for a film.

You can still read the whole thing for free on Wattpad. And feel free to Google "punk Harry Styles" in order to learn a little more about this trend of photoshopping piercings and tattoos onto otherwise pristine pop stars.

How do you feel about fanfiction? Does it take anything away when fanfiction is published? Oh, and just for fun, who would you most like to see get the Fifty Shades/Awake treatment?

Joshua Chaplinsky from New York is reading a lot more during the quarantine June 5, 2014 - 6:44am

Yikes. Hope they get her a good editor.

Community Manager
helpfulsnowman from Colorado is reading But What If We're Wrong? by Chuck Klosterman June 5, 2014 - 11:53am

I feel it's necessary to point out that Wattpad won't let a fella copy and paste, so all of that had to be transcribed, word for word.

This is why aliens won't talk to us...

*sighs and pulls out the eye bleach*

Simon & Schuster are really loving their fan fic aren't they? I wonder if they've set aside a department dedicated to people browsing wattpad and other sites dedicated to this sort of stuff. They've already published some kinky Twilight fan fic. [sigh] I can't pretend that I didn't read fan fiction when I was a teenager. There was a really funny fic a girl wrote that took the world of Harry Potter and applied the language and sillyness of Louise Rennison's Georgia Nicolson series to it. One of the lesser known characters, Quidditch player Katie Bell, was the main protagonist. It was funny and interesting, but I can't see it being published.