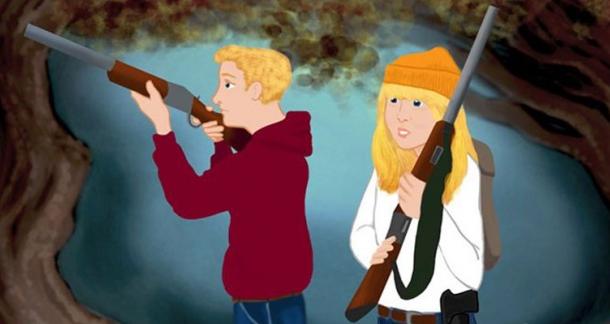 What would’ve happened to Belle had she been packing some heat upon meeting the Beast? Would Sleeping Beauty still have married her prince if she'd woken up with a gun under her pillow? The NRA has supposedly started a campaign that may answer these very questions.

The National Rifle Association is featuring pro-firearm versions of classic fairytale stories on its website, reports The Guardian. The most recent addition to the series is Hansel and Gretel (Have Guns). Instead of being terrified of the witch, the orphans are prepared to defend themselves to the best of their ability. An accompanying illustration shows the orphans lost in the woods while toting rifles.

Little Red Riding Hood Has a Gun, another rewritten classic, displays a firearm-wielding Red who scares off the wolf by just aiming her rifle at the villain. Granny even joins in on the fun, whipping out her scattergun when the wolf tries to eat her.

The NRA’s website editors have commented on the controversial reimagining:

Most of us probably grew up having fairy tales read to us as we drifted off to sleep. But how many times have you thought back and realized just how, well, grim some of them are? Did any of them ever make your rest a little bit uneasy? Have you ever wondered what those same fairy tales might sound like if the hapless Red Riding Hoods, Hansels and Gretels had been taught about gun safety and how to use firearms?

Which version of the fairytales—the classic, or the trigger-happy NRA stories—do you prefer?

Wow these sound like right winger rewrites. Sounds so bad its good.

Prefer originals, up to a point. But this isnt the answer.

I prefer the no war wear clogs version myself.