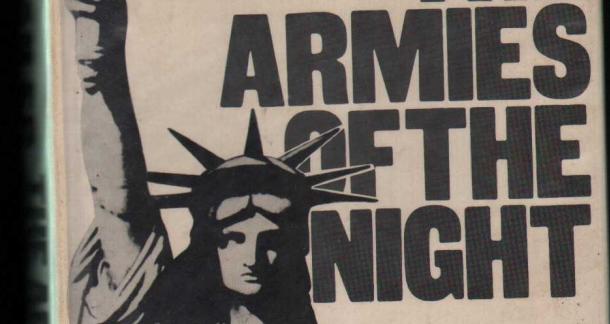 Norman Mailer's The Armies Of The Night is headed to the big screen.

The non-fiction novel (yeah, we'll get to that) chronicles a real-life gathering of over 50,000 people who marched from the Lincoln Memorial to the Pentagon in protest of the Vietnam War. The vast majority of participants were regular people, but the march also attracted stars of the day including Abbie Hoffman, Alan Ginsberg, and Norman Mailer, who was arrested with about 650 others for civil disobedience.

The novel itself is an interesting piece. The full title is Armies of the Night: History as a Novel/The Novel as History. It won the Pulitzer for "General Non-Fiction" in 1969. However, the book is written in third person, and it would seem the historical events are depicted accurately while the character of Norman Mailer is not. Not necessarily, anyway.

Some credited Mailer with inventing the genre "Non-Fiction Novel" with this book, however others would point to Capote's In Cold Blood or Thompson's Hell's Angels as treading the ground first. Others with a less North-American bent will point to a book titled Operación Massacre by an Argentinean author Rodolfo Walsh. Any way you slice it, all of these books came out within about 10 years of each other.

There is also a small number of people who call the genre "faction", a slapping together of "fiction" and "fact", which never caught on. Probably because when you say it, you then have to just go back and explain it.

Joe Berlinger, director of the film adaptation, plans to blend reality and fiction as well, using movie magic to combine original footage with new footage shot for the movie.

Berlinger, from the press release:

...we find ourselves in a new time of protests on the streets, and tensions in the air, I couldn't imagine a more relevant time to bring Mailer's vision of civil disobedience to the big screen.