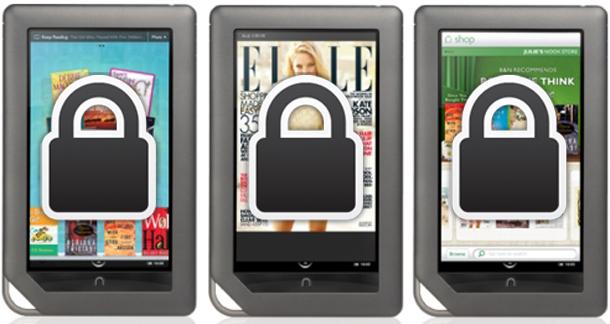 When the new Nook Tablet was announced earlier this month, one of the selling points was supposed to be its 16 GB of internal storage, double the 8 GB of the Kindle Fire.

But Barnes & Noble neglected to mention that, out of those 16 GB, only 1 GB can be used to store whatever you want. The rest of the tablet's space is reserved for material downloaded through their store and apps. So if you've got music, movies, or PDFs that you want to store on the device? Good luck with that.

Here's a breakdown of the Nook Tablet's memory: About 3 GB are reserved for the operating system. That means about 13 GB are left over for the user, and 12 of those have to be Barnes & Noble-related purchases. You can use a microSD card to bump the storage up to 32 GB total, and while the use of the additional memory isn't restricted, you still have to lay out the money for the card. That means paying to store your own stuff.

Barnes & Noble is planning to unveil its own video service next year, so that's good news if you plan to use the Nook Tablet to watch movies. Because your only option right now would be to download them through another service, pay for a microSD card, and watch them that way.

The restriction isn't egregious, but it's still a little obnoxious. Obviously Barnes & Noble didn't release a tablet so that you could run off and buy all your stuff from Amazon, but they should have made that a little more clear. As in, they could have said it when they announced the specs, instead of waiting for someone to buy it, discover this, and then call them on it.

So, if you were eyeing the Nook as an alternative to some of the other tablets on the market, this is an important thing to keep in mind. It's less of a tablet and more of a Barnes & Noble consumption device (though I'm sure in the next ten minutes some hacker will find an exploit that'll let you store whatever you want).

The Nook Tablet costs $250, compared to the $200 Kindle Fire. There are no restrictions on memory use in the Fire, which offers less internal storage in favor of cloud storage.

You get what you pay for...

Joshua Chaplinsky from New York is reading a lot more during the quarantine November 18, 2011 - 9:07am

The more I read about various eReader/tablets, the more I lean towards buying an iPad.

The Nook does have a micro sd card slot, which means, depending on your finances, you can add another 4gb to 32gb.  It is weird to allocate/dedicate that much storage, but my guess is B$N is hoping you'll be loading it up with their goodies, plus I'm sure a good amount of that storage is earmarked to the system.  The Kindle Fire gets around this by leaning heavily on "the cloud" which is great if you are always connected to wifi while using it - translation: some if not all of your media is stored OFF the device, so you may not have access to some or all of your stuff without a wifi connection, which is increasingly becoming a non-issue for some..  That having been said, I wonder how much of the Kindle Fire's 8gb is "no restrictions" since some of it HAS to be used for the device...

I love my Nook Color and that has no restrictions as far as hard drive space.  Plus, it works with Linux.  :)

Jason C from Quad Cities, Iowa is reading Growing Up Dead In Texas by Stephen Graham Jones December 14, 2011 - 1:01am

You have to pay at least $80 to use that Amazon cloud storage.