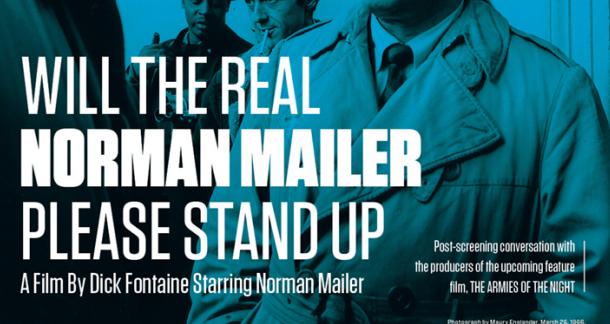 NO FILTER, a quarterly screening series hosted at the Wythe Hotel in Williamsburg (uh, the hip New York Williamsburg, not the colonial one), will be screening Will The Real Norman Mailer Please Stand Up? on October 21st.

The film chronicles the events Mailer wrote about in his semi-non-fiction, Pulitzer-winning book The Armies Of The Night.

The film's summary on IMDB:

In addition, the screening is sandwiched by James Toback reading an excerpt from The Armies Of The Night beforehand, and a conversation with screenwriter/playwright/Norman Mailer offspring John Buffalo Mailer afterwards. Plus, the whole shindig is sponsored by Four Roses Bourbon and Mast Chocolate. There's really not a lot of ways for this to end up a bad night out. Mark your calendars.