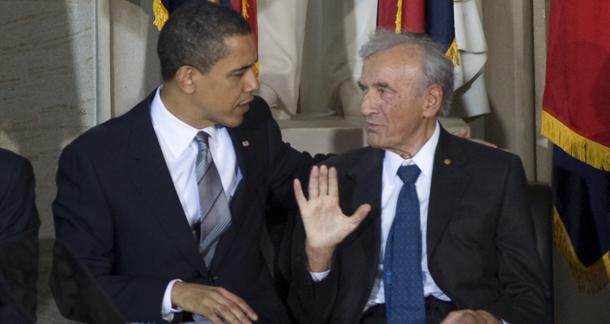 In an interview with Israeli newspaper Haaretz, 84-year-old Elie Wiesel talked about how he and President Obama had begun to write a book together after a shared trip to Buchenwald.

The author, who was awarded the Nobel Peace Prize in 1986, has written over 30 non-fiction and fiction books, including the acclaimed Night Trilogy, written after surviving his imprisonment at Buchenwald at the end of WWII. After Wiesel accepted an invitation to travel to Buchenwald with the President, the two became good friends - Wiesel gets invited to dinner!

We talk about philosophy, contemplation, thought, but never about politics. He is a thinking person, a person with depth and intellectual curiosity.

Wiesel said he and the President were writing “ a book together, a book of two friends” and would be resuming the project after the election. Another prize winner? Only time will tell.

I think it's awesome. The President is a talented writer and, of course, so is Elie Weisel.

Amazing - thank you for sharing.

EricMBacon from Vermont is reading The Autobiography of a Corpse November 7, 2012 - 5:57pm

I always find it comforting to have a person in the White House that is thoughtful and has artistic aspirations and appreciation. It isn't necessarily an indicator of governance, but a well-rounded individual would seem more likely to be able to understand things beyond their own experience and it bodes well for empathy.

Whatever you agree or disagree with in terms of his presidency it is hard to argue that he seems like a good man.

Courtney from the Midwest is reading Monkey: A Journey to the West and a thousand college textbooks November 7, 2012 - 8:11pm

I can't wait for this! It's going to be so interesting and probably a fantastic read.

Dwayne from Cincinnati, Ohio (suburbs) is reading books that rotate to often to keep this updated November 8, 2012 - 8:19am

Shouldn't he be busy running America? Or is this more a he is helping the two of them?