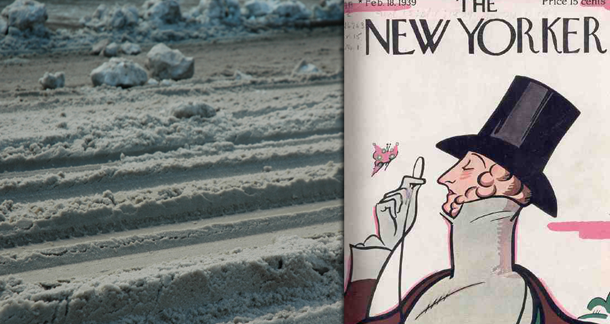 We’ve all wondered how the ‘slush’ pile works, as it’s an arcane device that occasionally throws up a gem — just not very often, statistically. One day, writer David Cameron decided to test the slush piles of some of the publications he’d submitted stories to in the past, in a quasi-scientific way, just to see what happened.

The test was to take a published short story from the New Yorker, change the author name and submit it for publication. He started with small publications and worked his way up to the majors, and the result was universally the same: it was rejected, clinically and generically, by all of them.

But it wasn't just the lower-tier non-A+ list who rejected this poor devil… I’ll break my silence to single out just one journal that declined this New Yorker short story: the New Yorker. Yes, in an act of inadvertent self-mortification, the New Yorker rejected itself.

He tried it again, with a short story by a young, up-and-coming author, also from the New Yorker, and got exactly the same result. I love his commentary on the slush pile, particularly why it’s not called the “jewel in the rough pile” and should be called the “gotta snake my drain” pile!

I guess it says a lot about the submission process in the first place — is there any point, if they won’t even look at, much less accept, an already published story? Feel free to share your rejection here, as a rejection shared is a rejection halved…

This doesn't really prove much, though... I mean, getting a piece published doesn't have everything to do with merit or quality. Timing is a huge consideration, and competition--maybe that piece, while good enough to have been published previously, was in competition with better pieces this time around. Or maybe they just weren't looking for a story like that. It's possible some of the readers even recognized the story and thought it was plagiarized and sent the form rejection.

It's also possible they didn't even look at it.

Or the truth is simply the majority of fiction does not get published unless you forge some sort of inside track.

Hi - I know I am late to the game with this comment, but I just recently became interested in The New Yorker and found this site. Anyway...

My two cents is that fiction editors come and go, hence the disparity in what is or is not accepted. Also, tastes and perspectives and interests change, both globally and personally. I don't imagine most of Woody Allen's shorts from Without Feathers would go over well as "new" stuff today.

It really is a matter of timing, zeitgeist, luck and, of course, talent.