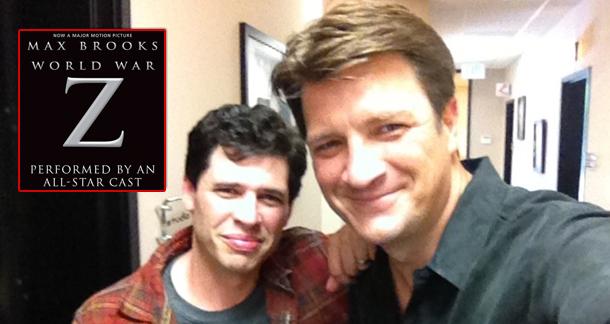 Geeks of Doom brings us the very cool news that Max Brooks' 'oral history' of the zombie apocalypse, World War Z, will be released as a deluxe audiobook on May 14th (available to pre-order now). This recording from Random House Audio will update the 2007 version by adding five hours worth of stories, making it the essential, unabridged edition.

Perhaps most impressive, however, are the actors and celebrities providing voice work. Brooks reprises his roll as the Interviewer, and original cast members Alan Alda, Mark Hamill, Carl and Rob Reiner, Henry Rollins and John Turturro have returned as well. Most notable among the new talent: the author's father Mel Brooks (yes, that Mel Brooks), actor/rapper Common, Denise Crosby (Star Trek: The Next Generation), Frank Darabont (director of The Shawshank Redemption and creator of The Walking Dead TV series), Nathan Fillion (Firefly, Castle), Alfred Molina (Spiderman 2, pretty much everything), Kal Penn (House), Simon Pegg (Shaun of the Dead), Jeri Ryan (Star Trek: Voyager), and Martin Scorsese (you really should know who this is). You can read the full cast list on Amazon in the product description.

The all-star recording comes out one month before the big Hollywood adaptation starring Brad Pitt, which apparently has nothing to to do with the source material. The coinciding release dates is of course lucrative for both parties, but it could also signify some thumb-biting toward the filmmakers: they made an in-name-only version of World War Z featuring one big name, so here's an adaptation of sorts that is the source material in all its glory, with tons of big names bringing the characters to life. No one involved with the audiobook's creation has indicated any spite, but you never know.

Who's pumped for this? I haven't read the book yet, so I may experience it for the first time with this recording. Anyone else in the same camp?