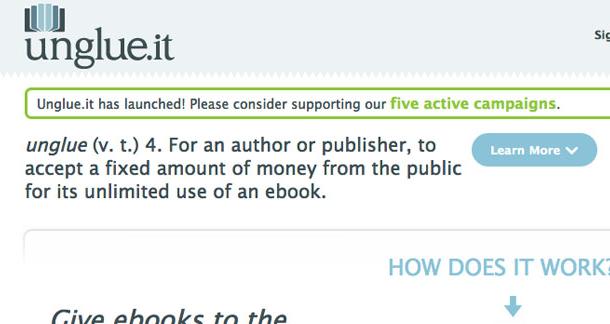 The newest attempt by the Internet to make everything free is unglue.it, a website modeled on Kickstarter that's seeking to pay copyright holders to release free electronic editions of their books.

Here's how the site works:

Its asks its users to suggest and vote on existing published works that they would like to see "unglued." The company then works with copyright holders - be they publishers or authors - to decide on a fair level of compensation in order to create a completely free and open eBook edition. The crowd then pledges money towards that amount.

Like Kickstarter, pledgers are offered rewards at various funding levels. For example, one book up to be unglued is Riverwatch by Joseph Nassise. If you pledge $1, you get the eBook sent to you when it's released. Pledge $1,000, and you get ten hours of telephone coaching on writing from Nassise. Like Kickstarter, if the full goal isn't met ($25,000 in the next 39 days for Riverwatch), then the project isn't funded.

There's only a few books up at the moment, and none of them have raised a whole lot of money thus far. So it remains to be seen whether this concept catches on. In addition, the copyright holder (like the publisher) doesn't lose the copyright--they're permitted to sell foreign and film rights, put out print editions, even put out their own eBooks. All this does is create the ability to make a free eBook edition for the world to share.

This seems to strike a marriage between letting people share information, while still compensating artists. I'm not entirely sold on the concept, but I am happy to see a plan to actually pay writers for their work.

What do you think, folks? To the comments!

Joshua Chaplinsky from New York is reading a lot more during the quarantine May 22, 2012 - 7:09am

Interesting idea, but here's the thing: The reward for anything over $1 is a copy of the eBook. Contribute more than five or ten dollars and you might as well purchase/download the book elsewhere. Unless you want one of the bigger incentives or are doing this in the interest of sticking it to the man, what's the point? And are we really going to see any major works represented here? Pickings are slim right now.

I can't imagine it ever working, for just the reason Josh said. By the time a person donates for various books, they might as well have just bought the book outright.